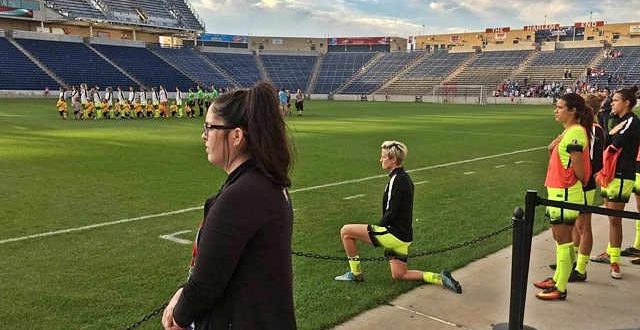 “It was very intentional,” Rapinoe told American Soccer Now . “It was a little nod to Kaepernick and everything that he’s standing for right now. I think it’s actually pretty disgusting the way he was treated and the way that a lot of the media has covered it and made it about something that it absolutely isn’t. We need to have a more thoughtful, two-sided conversation about racial issues in this country.

“Being a gay American, I know what it means to look at the flag and not have it protect all of your liberties. It was something small that I could do and something that I plan to keep doing in the future and hopefully spark some meaningful conversation around it. It’s important to have white people stand in support of people of color on this. We don’t need to be the leading voice, of course, but standing in support of them is something that’s really powerful.”

Rapinoe’s protest follows similar actions by San Francisco 49ers quarterback Colin Kaepernick. He told NFL Media that he refused to “stand up to show pride in a flag for a country that oppresses Black people and people of color.”

“To me, this is bigger than football and it would be selfish on my part to look the other way. There are bodies in the street and people getting paid leave and getting away with murder,” he is quoted as saying.

On Thursday, Seahawks cornerback Jeremy Lane didn’t stand for the anthem before the Seahawks’ final preseason game against the Raiders.

AP NFL shot a photo of Lane sitting alone on the Seahawks bench during the anthem.

Web articles – via partners/network co-ordinators. This website and its contents are the exclusive property of ANGA Media Corporation . We appreciate your feedback and respond to every request. Please fill in the form or send us email to: [email protected]
Previous: Cyberpunk 2077 has more developers on it than The Witcher 3
Next: Sylvester Stallone Death Hoax: ‘Rocky star’ shares photo, proves he is alive and well