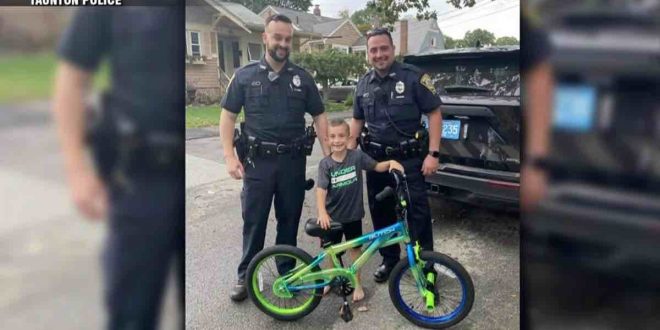 A pair of Taunton police officers went above and beyond to surprise a little boy with a brand new bicycle.

Six-year-old Bryan King and his mom Dawn visited the police department Thursday to say thank you to the officers who donated the generous gift after the boy had two bikes stolen in just a few weeks.

“We both got in the same cruiser, just rolled up to the house, got the bike out of the back seat, and just gave it to him,” said officer Michael Flynn.

The gift from the officers came after they responded to the second theft at the King family’s home Wednesday. After they left, the officers said they knew just what would make Bryan’s day.

The blue and green BMX bike the officers bought is identical to the second stolen bike.

The police chief said they made the purchase with their own money and the gift is already making a big difference to the little boy.

“It makes me happy,” said Bryan

His whole family feeling the love too.

“This just blew my day out of the water. I cried. It was heartfelt. It was truly heartfelt,” his mom said.

Web articles – via partners/network co-ordinators. This website and its contents are the exclusive property of ANGA Media Corporation . We appreciate your feedback and respond to every request. Please fill in the form or send us email to: [email protected]
Previous: The Caribbean island where you need to earn $70K to enter
Next: China: Organic molecule remnants found in dinosaur fossils