Home » Canada » Moose on the loose near Buttonville airport (Photo) 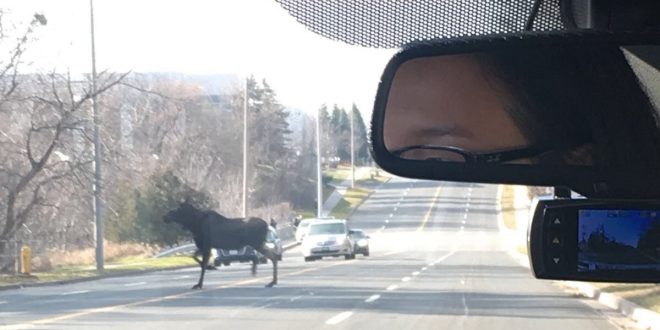 Moose on the loose near Buttonville airport (Photo)

Moose on the loose near Buttonville airport (Photo)

In a real life version of a “meanwhile in Canada…” meme, there’s a moose on the loose near Buttonville airport and Hwy 404.

Members of animal services, the Ontario Provincial Police and the Ministry of Natural Resources have all been on the hunt for the skittish animal ever since.

By about 10:30 a.m., the moose had made its way to the southwest corner of the airport and, at one point, crossed onto a runway.

Shortly afterwards, the moose wandered east of the airport and into residential areas where it ran through backyards and across driveways.

It ran across Woodbine Avenue at one point, narrowly missing two drivers that slammed on the brakes as it passed.

OPP and York Regional Police officers have been tracking the moose’s movements but have called off a continued search so it can “settle down.”

It was last seen in a wooded area near Village Parkway just south of 16th Avenue.

“If we don’t stop chasing after it it’s going to die eventually so we want to back off, use our UAV, locate it, let it settle down and get the MNR in there and hopefully (MNR) can tranquilize it,” York Regional Police Sgt. Scott Hunter said.

Hunter said once the animal is in a safe area, officials will use a tranquilizer to subdue it.

In the meantime, OPP Sgt. Kerry Schmidt urged drivers travelling in Markham to be “alert and attentive.”

MNR officials said Highway 404 was closed for a short period of time when it looked as if the moose would jump into live lanes of traffic.

“It is a traffic safety hazard. We did have the highway shut down temporarily just when he was on the highway side of the fence,” Schmidt told Canadajournal. “We just don’t want him getting hurt and we certainly don’t want anyone else on the road to get hurt.”

Jolanta Kowalski from the Ministry of Natural Resources (MNR) said its staff arrived at the scene armed with tranquilizer guns at about 10 a.m. and have been following the moose ever since.

She said the ideal solution would be to “funnel” the animal into a green space without firing at it. If that fails, they will attempt to fire tranquilizers at it and move it north of the GTA.

The tranquilizer darts take three to five minutes to take effect and properly sedate the animal — and in those few minutes the animal can become wild and unpredictable — so officials hope they can corral the animal before firing at it.

She called the sighting of a moose in the GTA “fairly unusual.”

MNR official Emily Funnell said the moose had travelled to the 16th Avenue and Kennedy Road area by 3 p.m.

Funnell said it had calmed down significantly and was not moving around as much.

“This animal has been through a lot of stress over the last few hours.”

She added that moose are known to die due to prolonged bouts of stress.

At about 5 p.m., MNR officials left the scene. Officials last spotted the moose at 3 p.m. and believe it went to sleep.

It is too dangerous to attempt to tranquilize a large animal without daylight, Kowalski told Canadajournal.

Both Ontario Provincial Police and York Regional Police have crews on the ground in the area monitoring the situation.

There is a hope the moose will wake up and make its way north away from developed areas.

Schmidt said that moose and other large animals don’t often travel south into the GTA, but a motorist struck an elk crossing Highway 400 about one month ago.

Web articles – via partners/network co-ordinators. This website and its contents are the exclusive property of ANGA Media Corporation . We appreciate your feedback and respond to every request. Please fill in the form or send us email to: [email protected]
Previous: Justin Trudeau apologises for abuse of indigenous people
Next: Police: Man dead in Hamilton after trench collapses on him