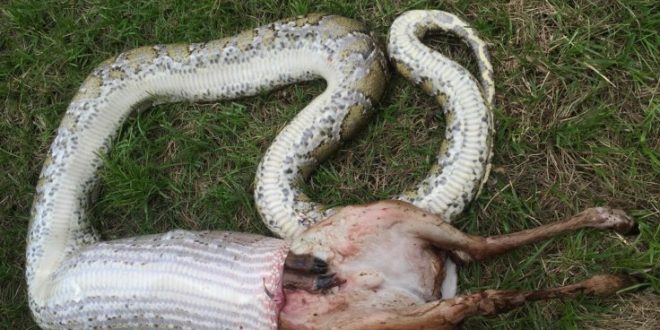 Burmese python devours white-tailed deer that weighed more than the python itself in Florida.

Graphic photos of an 11-foot Burmese python that devoured a white-tailed deer fawn, more than that of its own weight, were released Thursday. In one of the photos, the 31-pound python could be seen with his belly inflated as it had eaten the 35-pound deer.

The photos were taken in April 2015, but released Thursday by the Conservancy of Southwest Florida. The photos were captured after land managers noticed the female Burmese python in Collier-Seminole State Park with a big bulge in the belly.

New research by scientists in Collier County suggests the snake might be snacking above its weight class. The deer is believed to be the largest python-to-prey ratio documented to date. The report of the findings was published in the Herpetological Review this month.

“It almost did not compute,” Ian Bartoszek, wildlife biologist and science coordinator for the conservancy during an announcement of the findings in the conservancy’s snake laboratory. “We were sitting there just trying to process that an animal this size could get its head around what turned out to be a deer. It’s surreal to see that in the field.”

The group of researchers moved the snake out of the wild into an open area where the python regurgitated the deer as the snake was stressed, Bartoszek said, adding the reptile would have fully digested the deer fawn.

“Our research and removal efforts are driven by what the science shows us,” Conservancy of Southwest Florida President and CEO Rob Moher said. “We are learning valuable information that is helping us push back against this invasive species that is significantly and negatively impacting our native wildlife.”

The incident of the Burmese python successfully devouring the fawn heavier in weight than itself was “jaw-dropping,” Bartoszek said. “It showed my team and myself what we were actually dealing with out there, what this python is capable of,” he reportedly said.

“Pythons pose a concern for all native wildlife in Florida,” she wrote in the email. “Although infrequent, pythons are known to occasionally take a fawn or small deer, and this has been well documented previously. However, pythons are not believed to be a significant predator of deer.”

Web articles – via partners/network co-ordinators. This website and its contents are the exclusive property of ANGA Media Corporation . We appreciate your feedback and respond to every request. Please fill in the form or send us email to: [email protected]
Previous: Wrong San Jose plane: Woman thought she was booked on a flight to California
Next: Canada: Guy finds bulging lump on his hand after dentist trip