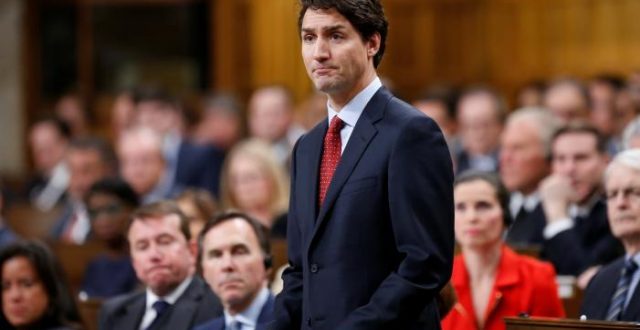 Justin Trudeau offered a broad and emotional apology Friday to indigenous people in the province of Newfoundland and Labrador, where for much of the 20th century indigenous children were compelled to attend boarding schools that separated them from their families and cultures and, in many cases, subjected them to abuse.

Trudeau offered the apology for beatings, sexual abuse, neglect and loss of Innu and Inuit language and culture at residential schools in the province. They were located in North West River, Makkovik, Cartwright and Nain — all in Labrador — and one in St. Anthony in northern Newfoundland.

The International Grenfell Association ran three of the schools, while the Germany-based Moravian missionaries ran the other two.

Trudeau said parents were promised their children would be cared for and would be safe.

Instead, kids as young as five were isolated from their families and stripped of their identity. They were made to feel “irrelevant and inferior” and taught to be “ashamed of who they were and where they were from.”

“The kind of thinking that led to the establishment of the residential school system and left deep scars for so many has no place in our society,” Trudeau said. “It was unacceptable then and it is unacceptable now.”

The former students were left out of a compensation package and national apology in 2008 by former prime minister Stephen Harper. His Conservative government argued that Ottawa didn’t oversee those schools, but the Liberal government offered last year to settle a class-action lawsuit for $50 million.

Toby Obed accepted the prime minister’s apology on behalf of former students.
Approaching the stage, his arms raised in triumph, Obed yelled: “We got it!”
“Because I come from a patient and forgiving culture I think it is proper for us to accept an apology from the Government of Canada,” he said.

Web articles – via partners/network co-ordinators. This website and its contents are the exclusive property of ANGA Media Corporation . We appreciate your feedback and respond to every request. Please fill in the form or send us email to: [email protected]
Previous: Man Plans to Fly in Homemade Rocket to Prove Earth is Flat (Video)
Next: Moose on the loose near Buttonville airport (Photo)