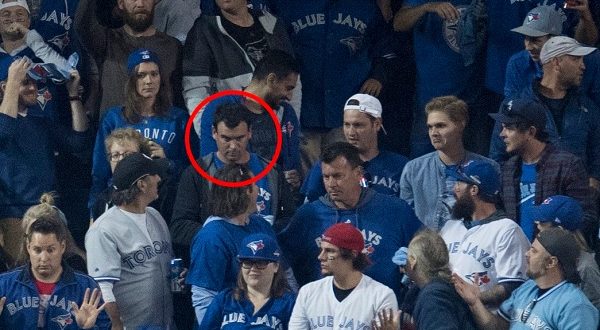 Toronto Police have released a photo of a suspect wanted for tossing a beer can onto the field during play at the Blue Jays-Orioles wild card game on Wednesday.

On Wednesday, Toronto police circulated a photo of a man they said was responsible for the beer can tossed at Baltimore Orioles outfielder Hyun Soo Kim during the seventh inning of Tuesday’s American League Wild Card game. On Wednesday, that man turned himself in and was subsequently covered in the pages of Postmedia… as one of the company’s own:

Ken Pagan, who was at the game Tuesday on a night off from work, said he had been advised by his lawyer, Frank Genesee, not to speak about the incident but did suggest the police may have it wrong.

“I was drinking out of a cup,” Pagan told Postmedia, and suggested Twitter photos that show him after the can was tossed clearly indicate he had a cup in his hand. “I’d love to tell you what happened and my story … but I can’t say anything.”

Pagan works out of Postmedia’s Hamilton, Ontario office and edits sports copy in ten Canadian newspapers including the National Post, Vancouver Sun and Montreal Gazette. He has not been charged and Toronto police promised to release more information about the investigation today.

Web articles – via partners/network co-ordinators. This website and its contents are the exclusive property of ANGA Media Corporation . We appreciate your feedback and respond to every request. Please fill in the form or send us email to: [email protected]
Previous: ‘Killer clowns’ come to Canada, Report
Next: Lawson Study: “Early marijuana use may disrupt brain function, lower IQ”