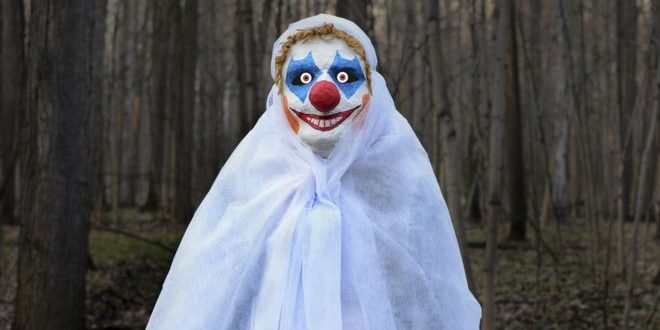 The creepy clown craze has landed some young people in Greater Sudbury in some not-so-funny trouble.

Police were called to New Sudbury on Wednesday night after reports of people in clown masks scaring others.

Police spokesperson Kaitlyn Dunn said the calls came in Tuesday and were the first the force have received regarding the so-called creepy clown phenomenon. She urged residents to contact police if such incidents are repeated.

“We’re urging the public to contact police, and provide as much detail as they can,” Dunn said.

If someone sees a rogue clown, try and provide as much detail as possible when calling, she added, including the license plate if they are driving and the clothes they are wearing.

Including details about the clown makeup?

Reports of creepy clown sightings have been growing since the first report emerged in August in South Carolina. More than a dozen incidents have been since reported in the U.S., as the phenomenon spreads via social media.

With Halloween coming, Dunn was asked whether police expected more creepy clown problems before the end of the month.

“We would hope not,” she said.

Web articles – via partners/network co-ordinators. This website and its contents are the exclusive property of ANGA Media Corporation . We appreciate your feedback and respond to every request. Please fill in the form or send us email to: [email protected]
Previous: ESA’s Rosetta probe ends its 12 year mission “Report”
Next: Alleged Rogers Centre Beer Can Tosser Identified (Video)