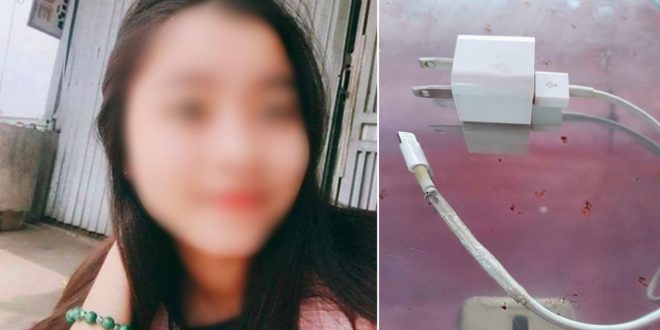 Vietnamese teenager dies after being electrocuted by iPhone cable

A teenage girl has died in Vietnam after being electrocuted in her sleep by her faulty iPhone charging cable.

Le Thi Xoan, aged 14, had reportedly rolled over onto the torn cable and had as a result been exposed to the live wire, police in the Vietnamese capital Hanoi said.

Police in Hanoi, Vietnam, found a burnt white cable on her bed and said a tear in the rubber casing may have caused the incident.

It’s thought she plugged her phone in and rested it on her bed – as she did every night – according to investigators.

The image of the cable shows it’s seemingly smaller than the 0.5 metre cable which is a staple with Apple products.

There are also visible tears in the cable which have been patched up, which could be where the live wires touched the young girl?

In America, charger extension cords are at the root of over 4,000 fires and dozens of deaths every year, according to the American Burn Association.

Apple hasn’t released a statement on this incident, and the investigators are still trying to determine if it was a genuine cable or a third-party one.

Canada Journal has contacted Apple for comment but none had arrived at the time of publication.

Web articles – via partners/network co-ordinators. This website and its contents are the exclusive property of ANGA Media Corporation . We appreciate your feedback and respond to every request. Please fill in the form or send us email to: [email protected]
Previous: Pesticides stop bees buzzing and releasing pollen, says new research
Next: UAE Plans to Build First Human City on Mars