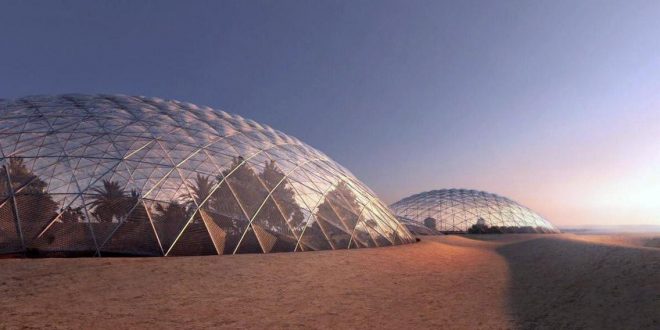 The UAE’s Mars project Hope is on track while the work on the Dh500-million Mars City in Dubai has started and will be completed in 30-month time, said a senior official of the UAE Space Agency.

The project, which was unveiled at the annual meetings for the UAE government in Abu Dhabi on Tuesday, encompasses laboratories for food, energy and water, as well as agricultural testing and studies about food security in the future. The science city will also boast a museum that displays humanity’s greatest space achievements, including educational areas meant to engage young citizens with space, and inspire in them a passion for exploration and discovery.

The walls of the museum will be 3D printed, using sand from the Emirati desert.

At the meetings, Sheikh Mohammed bin Rashid said, “The UAE seeks to establish international efforts to develop technologies that benefit humankind, and that establish the foundation of a better future for more generations to come. We also want to consolidate the passion for leadership in science in the UAE, contributing to improving life on earth and to developing innovative solutions to many of our global challenges.”

He continued, “The UAE is a great country with vision and understanding of the challenges we face and the rapid changes our world is experiencing. We believe in the potential of space exploration, and in collaborating with global partners and leaders in order to harness the findings of this research and movement that seeks to meet people’s needs and improve quality of life on earth.”

“The new project is another step in the UAE’s leading contributions to the global science movement; we seek to set an example and motivation for others to participate, and contribute, to humanity’s march into space,” he concluded.

Sheikh Mohamed bin Zayed said, “We have great confidence in our national work teams, and Emirates Mars Mission prove that our youth are trustworthy and capable of achieving national ambitions.”

The Mars Science City project falls within the UAE’s objectives to lead the global scientific race to take people to Mars, and is part of the Mars 2117 Strategy, launched during the fifth World Government Summit, which seeks to build the first settlement on Mars in the next 100 years.

This project will include advanced laboratories that stimulate the red planet’s terrain and harsh environment through advanced 3D printing technology and heat and radiation insulation. It seeks to attract the best scientific minds from around the world in a collaborative contribution in the UAE to human development and the improvement of life. It also seeks to address global challenges such as food, water and energy security on earth.

The plan for the Mars Science City project include an experiential element which will involve a team living in the stimulated red planet city for one year. It is hoped the experience will form an important reference model for future innovation around sustaining life in a hostile planetary environment. A range of experiments are to be devised which will lead to innovation around self-sufficiency in energy, water and food.

The Mars Science City structure will be the most sophisticated building the world, and will incorporate a realistic simulation environment replicating the conditions on the surface of Mars.

The city will consist of several domes, with innovative construction techniques providing support for the structures. A team of Emirati scientists, engineers and designers, led by a team from the Mohammed bin Rashid Space Centre and Dubai Municipality, will carry out the project, in cooperation with internationally renowned architects Bjarke Ingels.

Web articles – via partners/network co-ordinators. This website and its contents are the exclusive property of ANGA Media Corporation . We appreciate your feedback and respond to every request. Please fill in the form or send us email to: [email protected]
Previous: Le Thi Xoan: Teenager dies after being electrocuted by iPhone cable
Next: Dog ownership linked to lower mortality, says new study