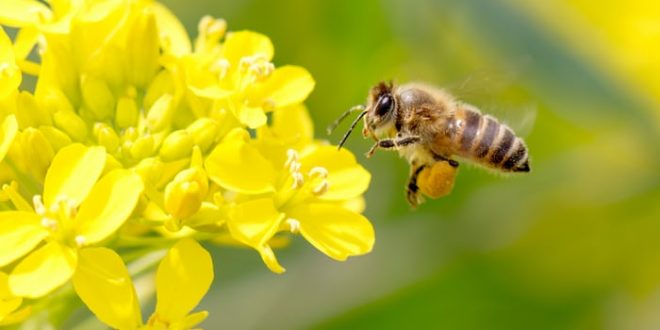 University of Stirling researchers found that doses of a neonicotinoid pesticide at similar levels to those found in agricultural fields interfered with the type of vibrations the bees produce as they collect pollen, significantly reducing the number of pollen grains collected.

Dr Penelope Whitehorn, who led the study, said: “Our result is the first to demonstrate quantitative changes in the type of buzzes produced by bees exposed to field-realistic levels of neonicotinoid.

The researchers analyzed the duration of the acoustic signals produced by bumblebees during a pollinating session. They found that the bees subjected to chronic pesticide exposure, at concentrations similar to those found in the real world, had a shorter buzz and lower buzzing effort than control bees. In turn, this meant those bees also collected significantly less pollen.

Dr Whitehorn added: “We found that control bees, who were not exposed to the pesticide, improved their pollen collection as they gained experience, which we interpreted as an ability to learn to buzz pollinate better.

“However, bees that came into contact with pesticide did not collect more pollen as they gained more experience, and by the end of the experiment collected between 47 percent and 56 percent less pollen compared to the control bees.”

As the name suggests, neonicotinoids are a group of synthetic insecticides that are chemically related to nicotine. Their widespread use in agriculture has come under a lot of heat in recent decades, namely in relation to their effects on the nervous systems of pollinating bees and impacts on the wider ecosystem.

The science behind the insecticides is often fiddly and never far from controversy. However, the past few years have brought increasing evidence against them, pushing more countries to reconsider their use. The most recent of which was the UK, which said this month it supports an extended ban on neonicotinoid pesticides.

Web articles – via partners/network co-ordinators. This website and its contents are the exclusive property of ANGA Media Corporation . We appreciate your feedback and respond to every request. Please fill in the form or send us email to: [email protected]
Previous: Do aliens exist? NASA reveals when it will find extraterrestrials
Next: Le Thi Xoan: Teenager dies after being electrocuted by iPhone cable