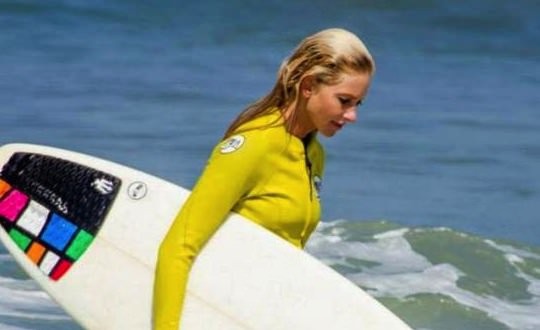 Honolulu police arrested professional surfer Jill Anjuli Hansen, 30, Wednesday night after she allegedly drove a car into an elderly woman in Waikiki, Hawaii News Now wrote. Hansen was charged with attempted murder and is being held on $1 million bail.

Police told local outlets that the 30-year-old surfer followed the 73-year-old woman through a condo complex’s security gate. When the victim exited her car, Hansen allegedly rammed her car into her, backed up and tried to hit her again.

That’s when, according to Hawaii News Now, a passerby smashed the car’s back window and Hansen fled. She was later found and arrested.

The victim’s husband said the woman suffered cuts and bruises but is expected to make a full recovery.

Hansen already had a pending assault case and, in a separate case, was ordered to undergo a mental health evaluation, Hawaii News Now reported.

Citing court documents, the outlet reported there is an active restraining order against Hansen, taken out by her father who said his daughter used Facebook to find someone to kill him and his family.

Hours after the latest incident, a post was made on a Facebook profile that matches Hansen’s particulars announcing that she is now officially a professional surfer, thanking her supporters.

Web articles – via partners/network co-ordinators. This website and its contents are the exclusive property of ANGA Media Corporation . We appreciate your feedback and respond to every request. Please fill in the form or send us email to: [email protected]
Previous: No link between autism and vaccination: new study says
Next: Montreal : Police discover IEDs in Cartierville triplex