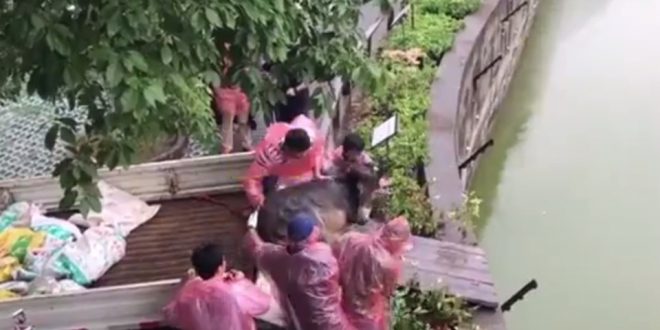 The horror moment a donkey was eaten alive after being pushed into a tiger enclosure at a Chinese zoo has been caught on camera.

Footage showing a group of people pushing the helpless animal off a ramp and into a moat in the predators’ enclosure at the Yancheng Safari Park yesterday (5 June) has gone viral on social media.

The tigers can be seen attacking the donkey and eventually killing it.

The Donkey Sanctuary’s Kevin Brown said: “Poor helpless animal…. how terrifying to have been thrown into the water and then slowly maimed by the tigers that are clearly captive animals and don’t know how to kill.

“Reports say the donkey’s terrifying ordeal lasted almost half an hour – what an utterly pointless exercise and a horrendously inhumane act.”

Alex Thiemann, vet at the sanctuary’s hospital, said the video made her feel sick.

“The welfare of the donkey has been utterly ignored,” she said.

“The actions of these individuals could only have had one possible outcome – the drawn-out and excruciatingly painful death of a frightened animal. And yet they seem to enjoy what they are doing.

“What they have done is inexcusable, and the park authorities need to ensure it never happens again.”

A witness told the South China Morning Post that the men who pushed the donkey into the enclosure also tried to throw a goat in but were stopped by visitors and security staff.

One social media user wrote: “The donkey screamed miserably when it was pushed down. What has a donkey to do with humans’ problems?”

Through its membership of the Animals for Asia Coalition, The Donkey Sanctuary is writing to Yancheng Safari Park to ask for an immediate ban on feeding live donkeys to predator species.

Web articles – via partners/network co-ordinators. This website and its contents are the exclusive property of ANGA Media Corporation . We appreciate your feedback and respond to every request. Please fill in the form or send us email to: [email protected]
Previous: New research says babies should sleep in their own room
Next: Qatar-based TV channel Al Jazeera says it’s combating large-scale cyberattack