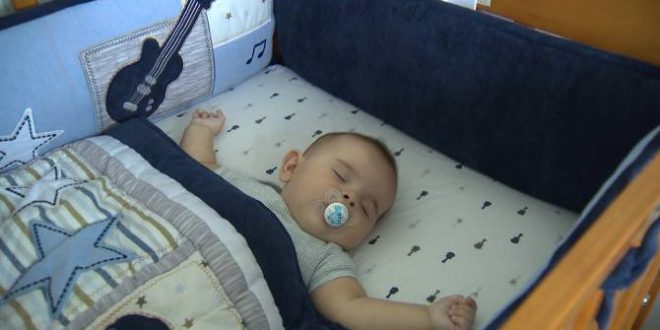 New research says babies should sleep in their own room

New research says babies should sleep in their own room

A new research is changing recommendations about where babies under the age of one should sleep.

The American Academy of Pediatrics is now recommending that babies older than 4-months-old be put to sleep in their own rooms.

AAP guidelines suggest allowing infants to sleep in their parents’ room (but not their bed) for at least six months and “ideally for a year” in order to reduce the risk of SIDS (sudden infant death syndrome) – a condition which the CDC says was responsible for 1,600 infant deaths in 2015.

However, Dr. Ian Paul, a professor of pediatrics and public health sciences at Pennsylvania State University, was skeptical of the AAP suggestions, telling CBS News that it was based largely on “expert opinion” and not “real data… That led us to question that recommendation.”

“It’s important for the Academy to have strong evidence and not just expert opinion to support our recommendations because these guidelines have such influence on practice and on parenting and child health,” he told NPR, adding that he and his colleagues “wanted to explore this” issue because they felt that “the evidence is really weak for 6 to 12 months.”

“I think in [the Academy’s] strong desire to prevent every single case of SIDS, they have looked at the data with a biased perspective,” Dr. Paul added. Sleep experts, he told CBS News, suggest that a child should be transitioned into his or her own room after the first few months of life.

To further investigate the issue, the Penn State professor and his colleagues looked at data from 230 first-time mothers who completed questionnaires when their babies were four, nine, 12 and 30 months old as part of a randomized, controlled trial that lasted for up to two years.

On the whole, infants who slept in their own rooms after four months of age remained asleep for longer periods of time, according to NPR. Early independent sleepers slept for an average of 10.5 hours per night, compared to 10 hours for later independent sleepers and 9.75 hours for 9-month-old room sharers, the study authors found.

Furthermore, infants who slept in their own rooms also tended to sleep undisturbed for longer stretches of time – nine hours, compared to 8.3 hours for later independent sleepers and 7.4 hours for children who remained in their parents’ bedroom after the age of 9 months.

“Based on the data we’ve provided and from others about safety and effectiveness, 6 months would seem to be a good time to transition a baby out of the parents’ room,” Dr. Paul told CBS News. However, Dr. Fern Hauck, a professor of family medicine and public health sciences at the University of Virginia who helped draft the AAP guidelines, disagrees.

The differences is sleep are negligible, and even room sharers were receiving seven hours of sleep on average – “well above the normal range for sleep at this age,” she told CBS News. Room sharing, she added, reduces the risk of SIDS, encourages mothers to breastfeed, and provides “peace of mind for parents as they can keep a closer watch on their baby.”

“My advice is to room-share for at least 6 months,” Dr. Hauck concluded. “After 6 months, since SIDS deaths are much less common, parents can have greater discretion in choosing what works best for them. Some may decide to keep their infants in their room longer, while others may choose to move them into their own rooms.”

Web articles – via partners/network co-ordinators. This website and its contents are the exclusive property of ANGA Media Corporation . We appreciate your feedback and respond to every request. Please fill in the form or send us email to: [email protected]
Previous: An egg a day helps baby stay healthy, finds new research
Next: Shocking Video: Live donkey thrown to feed tigers in Chinese zoo