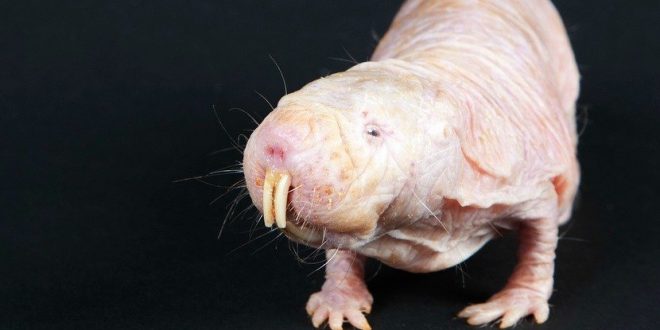 Naked mole rats (Heterocephalus glaber) have never been the most conventional mammal – the scrotum-looking creatures are resistant to cancer, can survive almost 20 minutes without oxygen, and can barely feel pain.

But new study has revealed that they’re even more bizarre than scientists could have ever imagined.

Researchers from the Max Delbrück Centre of Molecular Medicine in Berlin, Germany, have discovered that the animals, which live in large subterranean colonies, can switch their metabolism from burning glucose to burning fructose whenever the oxygen supply runs low.

And that’s something that happens pretty much on a daily basis. Naked mole rats sleep together underground in closely packed groups of up to 100. In such circumstances, oxygen levels gradually decrease and, for the animals in the centre of the slumbering bundle, fall well below levels that would suffocate other mammals.

But poor ventilation while asleep, it seems, doesn’t push the mole rats even close to their limits. Lab tests have shown that the animals can survive up to 18 minutes without any oxygen at all, becoming unconscious and dramatically lowering their heart rate, only to revive immediately when oxygen is reintroduced.

In research published in the journal Science, team led by Gary Lewin reveal that the naked mole rats’ remarkable survival ability stems from its ability to switch from metabolising glucose to fructose. This ensures internal organs that in other mammals would quickly succumb to low oxygen levels are protected.

Some other species are known to sometimes use fructose as an energy source, but only in specific organs, notably the kidneys and the liver. Such organs can make use of the sugar because they carry a specific transporter molecule called GLUT5, along with a fructose-processing enzyme, KHK.

The lack of GLUT5 and KHK in other organs – the brain and the heart, for instance – means the energy bound in fructose is unavailable to them, causing them to fail in low-oxygen environments.

Lewin’s team discovered very high levels of both substances throughout the mole rats, a distribution pattern never seen before.

The team took scores of blood samples from naked mole rats of various ages and compared them to samples taken from mice.

“There was nothing different in the use of the usual energy source – glucose – between naked mole rats and mice when there was no oxygen around,” says team member Jane Reznick.

“But we were quite surprised to find high levels of two unusual sugars – fructose and especially sucrose – in the blood of oxygen-deprived naked mole-rats. These sugars are mainly known for causing metabolic syndrome and sucrose is only made by plants.”

The role of sucrose in the animal’s metabolism is unknown, but it is a disaccharide, a complex sugar comprising equal parts of the monosaccharides glucose and fructose.

The work of Lewin and colleagues opens up fresh avenues for research into how the effects of oxygen deprivation might be countered in other species, including humans.

“Our work is the first evidence that a mammal switches to fructose as a fuel,” says Lewin.

He notes that h mice do not have this ability their genome is 94% similar to that of the mole rats. “Theoretically, very few changes might be needed to adopt this unusual metabolism,” he adds.

The research might also eventually yield insights into treatments for heart attack and stroke patients, who can suffer significant brain damage caused by a sudden depletion of oxygen supply to the brain.

Web articles – via partners/network co-ordinators. This website and its contents are the exclusive property of ANGA Media Corporation . We appreciate your feedback and respond to every request. Please fill in the form or send us email to: [email protected]
Previous: Vancouver belugas died from unknown toxin: investigation
Next: Police say two dead, three hurt in rail crash