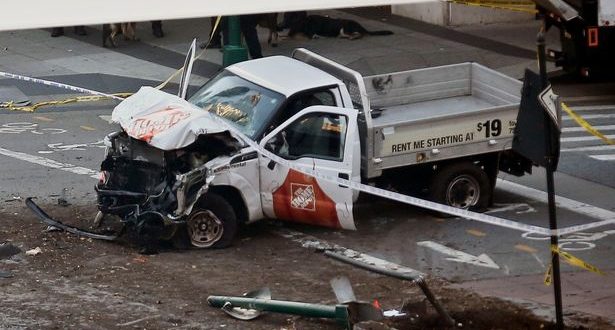 At least eight people were killed and nine more injured after a rental truck tore through a bike path in Lower Manhattan on Tuesday.

The truck was driven down a popular cycle path close to the World Trade Centre memorial, injuring at least 11 people on Tuesday afternoon.

The driver barrelled along the bike path in a rented Home Depot truck for the equivalent of about 14 blocks, or around eight-tenths of a mile, before slamming into a small yellow school bus.

He was shot in the stomach by police and arrested after jumping out of the van with what turned out to be a fake gun in each hand.

The mayhem and the burst of police gunfire set off panic in the neighbourhood and left the pavement strewn with bodies and mangled bicycles.

“I saw a lot of blood over there. A lot of people on the ground,” said Chen Yi, an Uber driver.

Eugene Duffy, a chef at a waterfront restaurant, said: “So many police came and they didn’t know what was happening. People were screaming. Females were screaming at the top of their lungs.”

Police closed off streets across the western edge of Manhattan along the Hudson River and officers rushed into the neighbourhood just as people were preparing for Halloween festivities, including the big annual parade through Greenwich Village.

“This was an act of terror, and a particularly cowardly act of terror aimed at innocent civilians, aimed at people going about their lives who had no idea what was about to hit them,” New York’s mayor Bill de Blasio said.

New York’s governor, Andrew Cuomo called it a “lone wolf” attack and said there was no evidence to suggest it was part of a wider plot.

On Twitter, president Donald Trump called it “another attack by a very sick and deranged person” and declared, “NOT IN THE U.S.A.!”

While police did not specifically blame the Islamic State group for the New York bloodshed, Mr Trump railed against the extremist group, tweeting, “We must not allow ISIS to return, or enter, our country after defeating them in the Middle East and elsewhere. Enough!”

The suspect has been named by US authorities as Sayfullo Saipov, an Uzbek immigrant.

Web articles – via partners/network co-ordinators. This website and its contents are the exclusive property of ANGA Media Corporation . We appreciate your feedback and respond to every request. Please fill in the form or send us email to: [email protected]
Previous: Researchers develop program to identify suicidal thoughts
Next: Neanderthals were doomed to fail, says new research