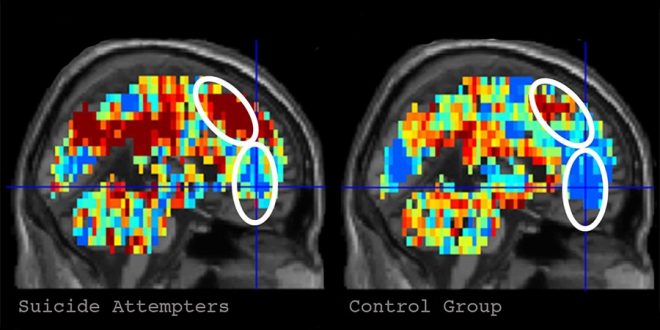 Researchers were able to spot suicidal thoughts on a brain scan – paving the way to new methods for screening people at risk of taking their own life.

“There really is a difference in the way [suicidal] people think about certain concepts,” according to Marcel Just, first author of the study.

The scientists asked two groups of participants — those with suicidal thoughts and those without — to lie in a brain scanner and watch words on a computer screen. “The words come up on the screen one at a time, they think about them for three seconds each, and we capture the brain activity while they’re thinking about what each of these concepts means,” Just explained.

The data from these brain scans were then run through a computer equipped with a machine learning program that can track patterns.

The computer program was able to accurately differentiate between suicidal and non-suicidal brains 90 percent of the time by analyzing the neural signatures caused by certain words.

“[The computer program] correctly identified 15 of the 17 suicidal participants and 16 of the 17 controls,” Just added.

However, because the study only used a group of 34 young adults, the results will need to be replicated on a bigger scale, according to Barry Horwitz, chief of brain imaging and modeling at the National Institute on Deafness and Other Communication Disorders. However, Horwitz believes that such brain scans will be imperative in helping mental health professionals prevent suicides.

“Just looking at behavior is probably inadequate for a lot of purposes. It’s much better to be able to see what the brain is doing,” Horwitz said.

Lisa Pan, an author of the study and an assistant professor of psychiatry at the University of Pittsburgh School of Medicine, also agrees that biological indicators of suicide risk are important in suicide prevention.

“We’re very bad at identifying which people who are presenting with risk are in fact going to go on and have a suicide attempt,” Pan said.

Web articles – via partners/network co-ordinators. This website and its contents are the exclusive property of ANGA Media Corporation . We appreciate your feedback and respond to every request. Please fill in the form or send us email to: [email protected]
Previous: Astronomers confirm how black hole relativistic jets form
Next: New York Terror Attack: Eight killed by man driving truck in Lower Manhattan