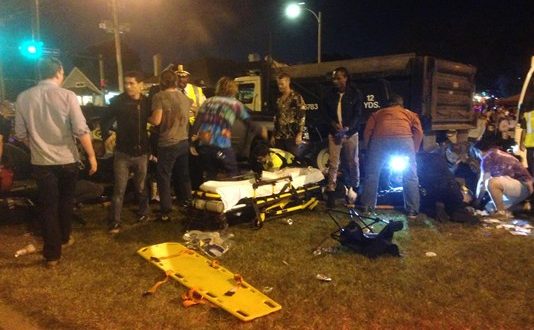 DWI suspected in crash that hurt 28 at New Orleans parade.

A suspect is in custody after 28 people were injured Saturday when a vehicle plowed into a crowd watching the Krewe of Endymion parade in the Mid-City section of New Orleans, police said.

Police Chief Michael Harrison said the suspect is being investigated for driving while intoxicated. Harrison was asked twice by the media if terrorism was suspected. While he didn’t say “No” he did say it looks like a case of DWI.

“We suspect that that subject was highly intoxicated,” he said.

The victims range in age from as young as 3 or 4-years-old to adults in their 30s and 40s, said Elder.

Among the injured was one New Orleans police officer. Harrison said the officer, who was on duty, was undergoing tests to determine the extent of her injuries. She was in “good spirits,” he said.

The accident came during one of the busiest nights of Mardi Gras when thousands of people throng the streets of Mid-City to watch the elaborate floats and clamor to catch beads and trinkets tossed from riders. As police and city officials were assessing the accident scene, people were streaming home as plastic bags that used to hold trinkets and discarded beads littered the ground. The area where the accident occurred was cordoned off with police barricades.

One woman at the scene told The New Orleans Advocate that a silver truck whisked by her just feet away as she was walking through the intersection.

Carrie Kinsella said, “I felt a rush it was so fast.”

Twenty-year-old Kourtney McKinnis told the Advocate that the driver of the truck seemed almost unaware of what he had just done.

Web articles – via partners/network co-ordinators. This website and its contents are the exclusive property of ANGA Media Corporation . We appreciate your feedback and respond to every request. Please fill in the form or send us email to: [email protected]
Previous: Mysterious sea creature in Philippines’ shore baffles researchers (Video)
Next: Small Ponds Can Speed Up Global Warming, Says New Study