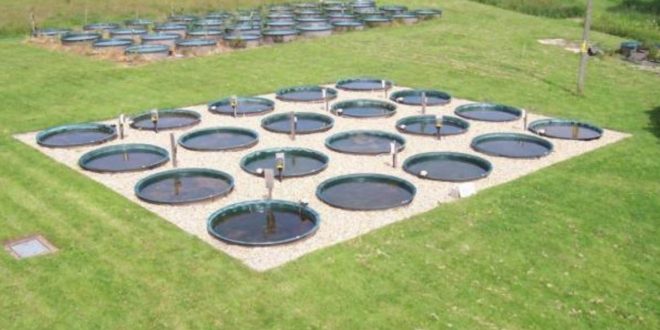 The researchers experimentally warmed an array of ponds over seven years by 4-5ºC and studied the impacts on greenhouse gas emissions and rates of metabolism.

Changes observed after the first year became “amplified” over a longer period, according to the study by the University of Exeter and Queen Mary University of London.

After seven years, a pond’s ability to absorb carbon dioxide (CO2) was reduced by almost half, while methane release almost doubled.

Lakes and ponds cover about 4% of Earth’s surface (excluding areas covered by glaciers and ice sheets) but they are disproportionately large sources of methane and CO2 to the atmosphere.

Ponds of less than one square metre are responsible for releasing about 40% of all methane emissions from inland waters.

“This is the first experiment to investigate the long-term effects of warming in aquatic ecosystems,” said lead author Professor Gabriel Yvon-Durocher, of the Environment and Sustainability Institute on the University of Exeter’s Penryn Campus in Cornwall.

“Given the substantial contribution small ponds make to the emission of greenhouse gases, it is vital to understand how they might respond to global warming.

“Our findings show that warming can fundamentally alter the carbon balance of small ponds over a number of years, reducing their capacity to absorb carbon dioxide and increasing emissions of methane.

“This could ultimately accelerate climate change.”

Such effects are known as “positive feedbacks” – where the effects of global warming on components of the biosphere lead to changes that further climate change.

“The amplified effects of experimental warming we have observed in ponds are different to those we typically see on land, where large initial effects of warming appear to diminish over the long term,” Professor Yvon-Durocher said.

“This accelerating effect in ponds, which could have serious impacts on climate change, is not currently accounted for in Intergovernmental Panel on Climate Change models.”

The paper, entitled “Long-term warming amplifies shifts in the carbon cycle of experimental ponds”, is published in the journal Nature Climate Change.

Web articles – via partners/network co-ordinators. This website and its contents are the exclusive property of ANGA Media Corporation . We appreciate your feedback and respond to every request. Please fill in the form or send us email to: [email protected]
Previous: New Orleans Parade Crash: 28 hurt; injuries not life-threatening; driver apparently drunk
Next: Bill Paxton: ‘Titanic,’ ‘Aliens’ star, dies after complications from surgery