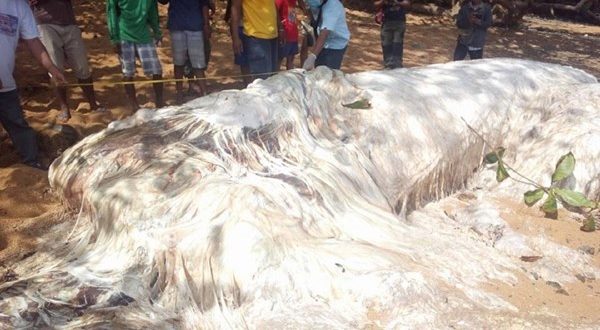 A huge, hairy mysterious sea creature has washed up on a beach in the Philippines.

It looks like something out of a weird alien movie rather than an actual sea creature, but who’s asking us? We’re not marine biologists.

What we do know is that this was by no means a cute furry animal when it was swimming around the sea, coming in at a whopping 6.3 metres in length. That’s not even including the tail which is missing, so this was a pretty huge unit – not something to be messed with.

As you can imagine, people were quick to try to identify what the weird being actually was. Initial reports had it down as a sea cow or a dugong, but now the team on the ground has confirmed it is some species of whale. Yep – we hadn’t heard of hairy whales before either, but again, we’ll leave that to the experts.

Unfortunately, that’s as much as we know so far in this slightly bizarre happening. Due to the advanced decomposition of the creature, scientists were unable to determine exactly what kind of whale it is. Samples from the carcass have been sent to a laboratory to see if more can be found out.

This was a pretty exciting event for the island, so the bones are going to be preserved as a memento.

For now, the creature remains a large, furry mystery.

Web articles – via partners/network co-ordinators. This website and its contents are the exclusive property of ANGA Media Corporation . We appreciate your feedback and respond to every request. Please fill in the form or send us email to: [email protected]
Previous: Hayao Miyazaki: Studio Ghibli Founder Is Coming Out Of Retirement
Next: New Orleans Parade Crash: 28 hurt; injuries not life-threatening; driver apparently drunk