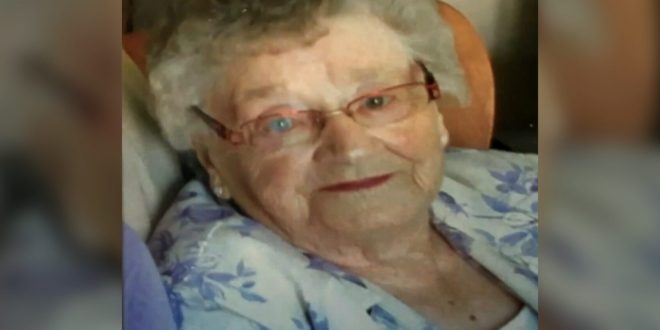 Mother dies after transported to hospital by taxi instead of ambulance

Mother dies after transported to hospital by taxi instead of ambulance

Freda, a 92-year-old woman has died in Cape Breton, N.S. after being transported from one hospital to another in a taxi, prompting her family to file a formal complaint against the Nova Scotia Health Authority.

After supper on Oct. 1, Freda started feeling sick. Around 6 p.m., she started throwing up, so Joe (her son) called an ambulance to their New Waterford home.

He and his mother were taken to Glace Bay Hospital because New Waterford Consolidated Hospital’s emergency department is closed evenings.

At about 6:30 p.m., Freda was admitted to the Glace Bay emergency department.

At 9 p.m. they saw a doctor. Tests were done then and again at midnight. Both showed Freda hadn’t had a heart attack and the health care team discharged her at 4 a.m.

While waiting for a taxi, Freda, in a wheelchair, started having chest and arm pain.

“She got right shaky and felt right squeamish,” Joe said.

He used the phone outside the triage to get a nurse, but didn’t get an answer. He called twice.

Seeing a cleaning lady, Joe asked her to go get someone. Four nurses and a doctor came. They looked Freda over in the waiting room.

“They told us the hospital was closing and if you are from New Waterford or (outside of Glace Bay) you had to either go home or go to the regional (hospital),” said Joe.

“You’d think with the chest pains and that they would have taken her back in and checked her. She even said, ‘I guess I’m going to die in a wheelchair.’”

On the Nova Scotia Health Authority’s (NSHA) website a statement was posted on Sept. 27 advising the Glace Bay ER would be closed from 6 a.m. on Oct. 2 to 7 a.m. on Oct. 4 because no physicians were available to work.

“I said, ‘well what about an ambulance.’ And they said, ‘There’s none available now.’”

A written statement from Emergency Health Services (EHS) spokesperson, Jean Spicer, said, “EHS Operations can confirm a paramedic unit was available for a hospital to hospital transfer within the CBRM on Oct. 2 between 5 a.m. and 8 a.m.”

It is unclear if EHS had been called or if they informed hospital staff of a long wait for service.

Brett MacDougall, director of integrated health emergency program of care for the NSHA Eastern Zone and site lead at the Cape Breton Regional Hospital said it is not common to do hospital transfers by taxi.

“We don’t use taxis. A patient’s given the option if they want to take a taxi as a form of transportation. We don’t have, like, a taxi service where we say ok we’re going to use this taxi service to transport patients regularly,” he said.

MacDougall explained sometimes hospitals give patients taxi chits if they need help getting home after being discharged or help getting to a referral or other health related appointment deemed necessary by staff.

“We have taxi chits that we give to patients sometimes if they are unable to get to a certain destination. And it’s only rare that that happens… when they are discharged,” he said.

After arriving at the Cape Breton Regional Hospital ER, Joe said a doctor immediately saw his mother. Blood work confirmed Freda had a heart attack “earlier.” She was admitted and put in a private room.

Joe doesn’t understand why his mother wasn’t brought back into the ER in Glace Bay or given a bed. He was not told there were no beds available.

Web articles – via partners/network co-ordinators. This website and its contents are the exclusive property of ANGA Media Corporation . We appreciate your feedback and respond to every request. Please fill in the form or send us email to: [email protected]
Previous: Experience Space Flight by Lying in Bed For 30 Days
Next: Erika Rosenbaum alleges harassment by Hollywood producer Harvey Weinstein