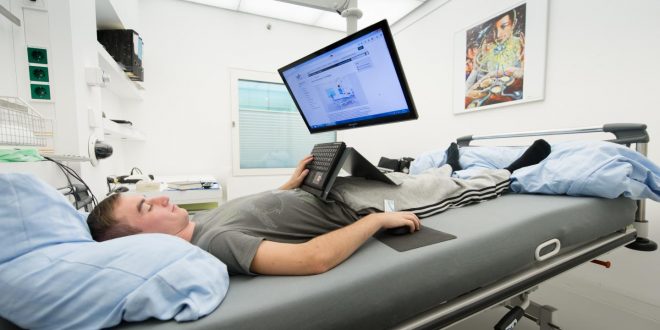 Getting paid to stay in bed might seem like paradise, but everyday tasks like showering, shitting, and sleeping comfortably become nearly impossible when you’re lying down all day.

Twelve volunteers will arrive this week at the German Space Agency’s (DLR) Institute of Aerospace Medicine’s :envihab facility to lie in bed for a month in the name of science. NASA’s Human Research Program, in partnership with DLR, is sponsoring investigations in this study to observe and analyze the effects of fluid pressure on astronauts’ eyes and optic nerves.

This study, known as VaPER (VIIP and Psychological :envihab Research), is part of NASA’s Flight Analogs Program. An analog environment is a situation on Earth that produces effects on the body similar to those experienced in space, both physical, mental and emotional. These studies are expected to help advance humans from lower-Earth orbit missions into deep space exploration.

The participants in VaPER will spend 30 days in bed with a six-degree head-down tilt and breathe air with 0.5% carbon dioxide. By comparison, carbon dioxide makes up about 0.04% of the air we breathe on Earth.

On the International Space Station, and many other space vehicles, carbon dioxide levels are higher than on Earth, due, in part, to the enclosed environment in which the astronauts live and work. Constant forced air circulation throughout the station ensures that pockets of CO2 that do form are quickly dispersed, and that the crew members always have plenty of clean air to breathe. The head-down tilt in the VaPER study will simulate the weightless nature of space, where the fluids in your body shift toward your head. These conditions will mimic the environment thought to cause vision problems experienced by some astronauts.

“On October 2, they admitted the first two subjects to begin,” said Lisa Spence, Flight Analogs Project Manager. “The next day two more arrived. They will continue this every day until they have admitted all 12.”

Bed rest studies offer scientists ways to see how the body adapts to weightlessness. Participants must live, eat, and even shower in the head-down position – and in this case – in the carbon dioxide environment. This causes their bodies to adapt as if they were in space. They are continuously monitored to understand how their bodies change and why. Results allow countermeasures to be devised that will help astronauts on space missions, as well as bed-ridden people on Earth.

While very structured, the participants’ days may not be as boring as it would seem. Participants are encouraged to set a goal such as learning a new language or taking a class online.

Additionally, daily routines, such as showering, take a lot of time when you cannot stand up to do them. There is continuous data collection including several MRIs to observe potential changes in either brain or eye structures. Blood pressure, heart rate, nutrient absorption, energy expenditure, bone mass and even the participants’ mood will also be monitored. Diet is strictly controlled giving participants little choice as to what or when they eat. Participants get to keep their phones to maintain contact with family and friends, although visitors to the facility will not be allowed.

Web articles – via partners/network co-ordinators. This website and its contents are the exclusive property of ANGA Media Corporation . We appreciate your feedback and respond to every request. Please fill in the form or send us email to: [email protected]
Previous: Scientists Create Programmable “Camouflaging” Material
Next: Mother dies after transported to hospital by taxi instead of ambulance