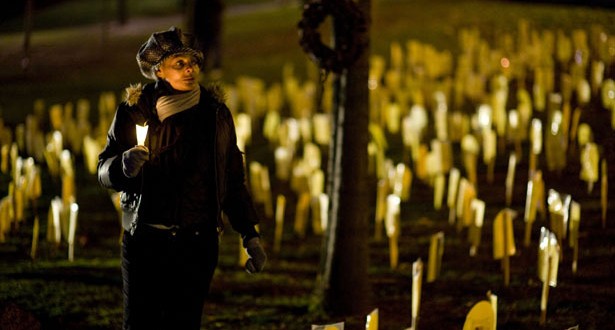 Members of the community gathered at Memorial University’s Faculty of Engineering in St. John’s last night for a vigil to remember the 14 women targeted and killed in the Montreal Massacre on December 6, 1989. VOCM’s Zaren Healey White reports.

24 years have passed since 14 women, 13 students and one employee, were shot to death at l’École Polytechnique in Montreal in a vicious and deliberate act of gender-based violence.

In 1991, two years after the murders of these students, the federal government named Dec. 6 as the National Day of Remembrance and Action on Violence Against Women.

Across all Canada, including Saskatchewan, flags on public buildings flew at half mast Friday.

The provincial cabinet minister responsible for the status of women said violence against women and girls “has no place in our society.”

“We need to work with our community partners across the province to tackle this issue head-on,” said June Draude, who is also minister of social services. “Saskatchewan women and girls deserve to live their lives without having to fear for their safety.”

The provincial government noted it’s spending $28 million this fiscal year in 81 agencies supporting women at risk of violence, and $11.8 million in 57 programs delivered by 45 agencies across Saskatchewan to support sexual assault programs and services trying to stop interpersonal violence and abuse. This money includes support for a new transition house in Melfort, and for expanded services at existing transition houses in Regina and Prince Albert.

“We have a vision of Saskatchewan as the safest place to live, work and raise a family,” Draude said in a news release. “To achieve that vision, all of us, including men and boys, need to work together to end violence against women and girls in our province.” With files from the StarPhoenix

Web articles – via partners/network co-ordinators. This website and its contents are the exclusive property of ANGA Media Corporation . We appreciate your feedback and respond to every request. Please fill in the form or send us email to: [email protected]
Previous: Steve Ballmer defends Xbox in final shareholder speech
Next: Al pacino 2013 : Actor to play Joe Paterno film