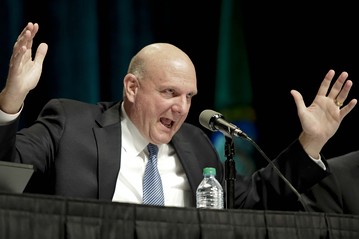 Recent speculation has suggested that former Nokia CEO Stephen Elop, who is in the running to replace Ballmer, is interested in selling the Xbox and Bing arms of the Microsoft business as he doesn’t believe they’re profitable.

Speaking about the Xbox One, as reported by Geek Wire and Seeking Alpha, Ballmer said the console’s integration of Bing and SkyDrive are examples of Microsoft executing on its plan to unify the company’s devices and services.

“No other company could have delivered what we are delivering with Xbox One,” Ballmer said. The console is a “reflection of what is possible when a company, our company, is unified under a common vision,” he added.

Ballmer announced his resignation in August, saying at the time that he would step down within the next 12 months, but not before a successor was named. Nokia CEO Stephen Elop, reportedly a front-runner to become new Microsoft CEO, may consider selling off the Xbox business and killing Bing entirely if he gets the job, according to a Bloomberg report this month. Elop joined Microsoft in September when Microsoft purchased Nokia’s handset business for $7.2 billion.

What’s more, Microsoft cofounder Steve Allen’s investment group Vulcan Capital said earlier this month that the next Microsoft CEO would be smart to sell of the Xbox business because it is “detracting” from Microsoft’s core competencies.

Web articles – via partners/network co-ordinators. This website and its contents are the exclusive property of ANGA Media Corporation . We appreciate your feedback and respond to every request. Please fill in the form or send us email to: [email protected]
Previous: Hollywood Reacts to Nelson Mandela’s Death : Charlize Theron, Morgan Freeman, Rihanna & More
Next: Montreal massacre : Polytechnique victims remembered