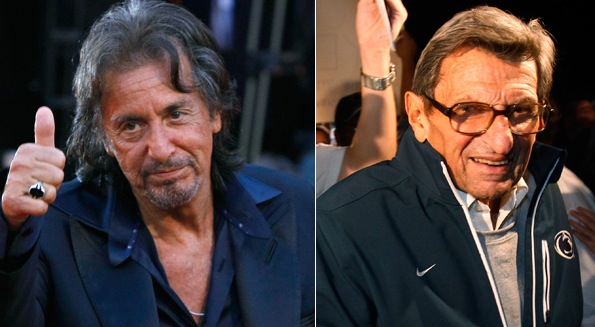 The film that will tell the story of the late Penn State football coach Joe Paterno is beginning to take shape. Al Pacino is attached to play Paterno in the biopic tentatively titled “Happy Valley,” and Brian De Palma will direct.

Pacino and De Palma have quite a bit of history together, having teamed up for 1993’s “Carlito’s Way” and 1983’s “Scarface.” In a statement to NBC News, “Wall Street” producer Edward R. Pressman, who optioned “Paterno,” the book the “Happy Valley” screenplay will be based on, talks about the legendary actor/director duo.

According to Deadline the flick will be based off of the best selling book “Paterno” by Joe Posnanski. “Wall Street” producer Edward Pressman has signed on to the project.

“’Happy Valley’ reunites the Scarface and ‘Carlito’s Way’ team of [director Brian] De Palma & Pacino for the third time and I can’t think of a better duo to tell this story of a complex, intensely righteous man who was brought down by his own tragic flaw,” Pressman told Deadline.

Paterno was successful, glorified head football coach at Penn State but his image was ruined when it was discovered that defensive coordinator Jerry Sandusky had been molesting children for years, and Paterno did little to stop it despite being aware of the situation.

Paterno was fired shortly after the Sandusky scandal was discovered and he died almost immediately after his firing. The NCAA has since stripped the Penn State football program of Paterno’s wins and a statue of Paterno on the Penn State campus has been removed.

Web articles – via partners/network co-ordinators. This website and its contents are the exclusive property of ANGA Media Corporation . We appreciate your feedback and respond to every request. Please fill in the form or send us email to: [email protected]
Previous: Montreal massacre : Polytechnique victims remembered
Next: Michelle Pfeiffer 2013 : Actress on vegan diet, exercise and plastic surgery