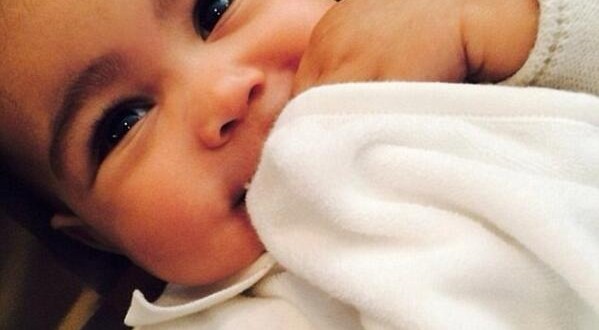 Why did Kim Kardashian and Kanye West name their newborn daughter North, you might just be wondering?

Don’t worry, we are too.

So far, they’re not saying anything, or releasing any details or photos — shocking, for the media-loving Kardashian family, which has been otherwise relentlessly hyping their E! show Keeping Up with the Kardashians and Kris Jenner’s new talk show.

But information is leaking out via E! about the baby. Apparently, the parents are informing everyone that that, “North means highest power.”

According to E!’s unnamed source, West and Kardashian “look at her as being their highest point together,” says a source. “Nothing is more special than North. Kim keeps saying, ‘She is our North Star.’ ”

I don’t know much about babies (or anything else), but I think North looks cute. Well, her mother Kim Kardashian obviously thinks so too and posted the above photo on Instagram .

And that’s when the internet took a good look and decided that the baby’s eyebrows look like they’d been waxed. Or perhaps just Photoshopped. Either way, the Us Weekly commenters want to get to the bottom of this possible anti-unibrow conspiracy. Here is a selection from the eyebrow detectives. (I didn’t include the names of the commenters, just in case they some day figure they’d rather forget about that time they commented on a baby’s eyebrows).

Web articles – via partners/network co-ordinators. This website and its contents are the exclusive property of ANGA Media Corporation . We appreciate your feedback and respond to every request. Please fill in the form or send us email to: [email protected]
Previous: Actress Angelina Jolie Removing Ovaries
Next: James Gandolfini’s Teenage Son To Inherit Bulk Of $70M Fortune