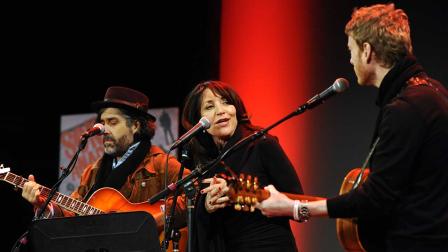 Katey Sagal album : ‘Sons of Anarchy’ Cover ‘For a Dancer’

The actress famous for playing Peg Bundy on “Married…With Children” and Gemma Teller Morrow on “Sons of Anarchy” is also a talented singer.

Katey Sagal has released her first album, “Covered,” in nearly a decade.

She got her start in the 1970s as a backup vocalist for musicians including Tanya Tucker and Bob Dylan. The latest album is a collection of songs that Sagal says inspire her.

“Covered” features a duet with Jackson Browne, and covers of songs by Tom Petty, Ryan Adams and others.

In addition to her latest album, Sagal has also contributed to the “Sons of Anarchy” soundtrack.

Web articles – via partners/network co-ordinators. This website and its contents are the exclusive property of ANGA Media Corporation . We appreciate your feedback and respond to every request. Please fill in the form or send us email to: [email protected]
Previous: Bethany Arceneaux :
Next: iPad mini Retina : on sale, supplies limited