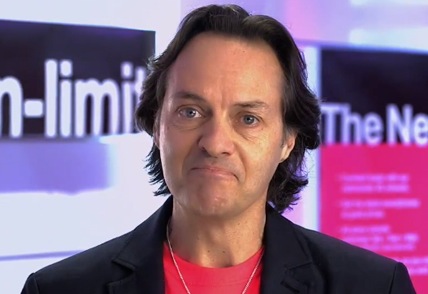 Ah CES, a time of innovation, gadgets, and — if you’re T-Mobile CEO John Legere — a time for getting kicked out of your competitor’s party.

Legere, an executive known for speaking his mind (often with colorful language), crashed AT&T’s Developer Summit concert tonight and spent some time hanging out with tech journalists, including CNET’s Roger Cheng. The event was held at the Palms Las Vegas and featured an appearance by Macklemore.

Legere took the job as CEO of T-Mobile US Inc., the country’s fourth-largest wireless carrier, in Sept. 2012, and has made a point of breaking with the status quo of the wireless industry, both in terms of personal style and business models. Legere dresses flashily and swears at company presentations. He has branded T-Mobile the “Un-carrier” and eliminated traditional two-year service contracts.

Since T-Mobile and AT&T use similar network technologies, Legere has launched initiatives aimed at luring iPhone users from AT&T to T-Mobile. In an apparent response, AT&T last week offered $200 to T-Mobile subscribers for switching to AT&T.

AT&T representatives had no immediate comment on the incident.

Web articles – via partners/network co-ordinators. This website and its contents are the exclusive property of ANGA Media Corporation . We appreciate your feedback and respond to every request. Please fill in the form or send us email to: [email protected]
Previous: Thai woman found in suitcase at US border (PHOTO)
Next: Nancy Grace Bashes Legalization of Marijuana (VIDEO)