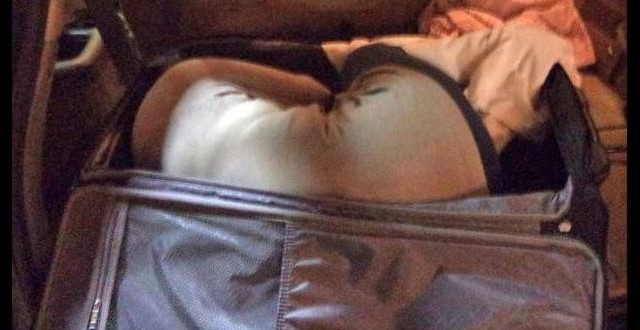 Thai woman found in suitcase at US border

Thai woman found in suitcase at US border (PHOTO)

A Phoenix man was facing federal charges after being stopped at the Mexican border allegedly trying to smuggle a woman into the United States in a suitcase.

Border agents in Nogales, Ariz. discovered 48-year-old Pornkamol Mongkolsermsak curled up inside a suitcase while searching a Honda SUV entering the U.S. on Dec. 30, according to Customs & Border Protection officials.

Here is a report of incidents involving drug and human traffickers from the Border Patrol:

Border Patrol officers stopped a 56-year-old man at the Port of Nogales on Dec. 30 and found a 48-year-old woman from Thailand hiding underneath clothing in a suitcase in the back of the man’s Honda SUV.

Agents on New Year’s Day stopped a 24-year-old Phoenix woman at the Port of Lukeville and seized 6,000 rounds of ammunition as she tried to enter Mexico. The ammunition was in three backpacks in the back seat of her sedan.

A 27-year-old woman from Mexico was arrested at the Port of Nogales on Dec. 22 after nearly 15 pounds of methamphetamine estimated to be worth about $232,000. Agents used the services a drug-sniffing dog.
On Dec. 26, officers at the Port of San Luis stopped a Chevrolet SUV driving by a 40-year-old Avondale man for further inspection and found more than 50 pounds of methamphetamine in the fuel tank. It was estimated to be worth more than $800,000.

And, on Dec. 27, a 32-year-old Glendale woman was apprehended at the Port of Naco for trying to smuggle nearly 136 pounds of marijuana worth about $68,000 in the tires her Nissan truck.
In each incident, the vehicles and contraband were seized, agents said.

Web articles – via partners/network co-ordinators. This website and its contents are the exclusive property of ANGA Media Corporation . We appreciate your feedback and respond to every request. Please fill in the form or send us email to: [email protected]
Previous: Gates Memoir : Former Defense Secretary says Obama lost faith in Afghan moves
Next: John Legere T-Mobile CEO Crashes AT&T CES Party in Las Vegas