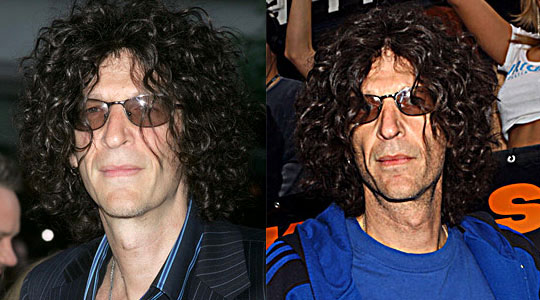 During his show today, Howard Stern admited to his staff and audience that he’s had some plastic surgery (he did this as part of a series of staff “Revelations” that he teased from about a month before he left Viacom all the way to Monday. Man’s a pro). According to Howard, he had the hump taken out of his nose and some fat sucked out from under his chin.

Stern weighed in yesterday with the confession that he had a nose job nine years ago — right after the filming of his movie, “Private Parts” — and liposuction not long after to suck out the waddle of fat under his chin.

He explained that, while he’d always hated his nose, doctor after doctor told him not to touch it. Finally, he said, one sketched out a simple fix that would pare away his speed bump, so he decided to have the surgery.

So why keep the news under wraps until now? With signature snarkiness, Stern said he discussed it with almost no one because he thinks the idea of plastic surgery is “very gay.”

Besides, he added, he doesn’t think anyone — besides his sister Ellen — even noticed.

He may be on to something there.

“It hasn’t helped!” laughed New York plastic surgery consultant Wendy Lewis. “Whatever he had done, it must have been very subtle, although, with all that hair, it’s hard to see his face very clearly.”

Plastic surgeons, though, agreed that the 6-foot-5 Stern couldn’t have gone from a beak to a button.

“The old nose was way out of proportion to the rest of his face,” said Park Avenue plastic surgeon Geoffrey Tobias, who specializes in rhinoplasty. “But he’s got very prominent eyes, a lot of hair and a lot of character. He doesn’t have to have a small nose. Having a good-size nose with good character is proportionate to the rest of his features.”

Actually, Stern confessed that his biggest fear was not how he’d look after a nose job but how he’d sound. Instead, Stern said, the surgery actually improved his voice.

Still, he claimed it isn’t the face work that makes him look “better” these days, but the fact that he works to stay in shape.

Of course, it doesn’t hurt that he always has a blond, 5-foot-10-inch model on his arm.

Web articles – via partners/network co-ordinators. This website and its contents are the exclusive property of ANGA Media Corporation . We appreciate your feedback and respond to every request. Please fill in the form or send us email to: [email protected]
Previous: British Nobel novelist Doris Lessing dies at 94
Next: Pregnant Megan Fox Covers Baby Bump on Lunch Date with Brian Austin Green