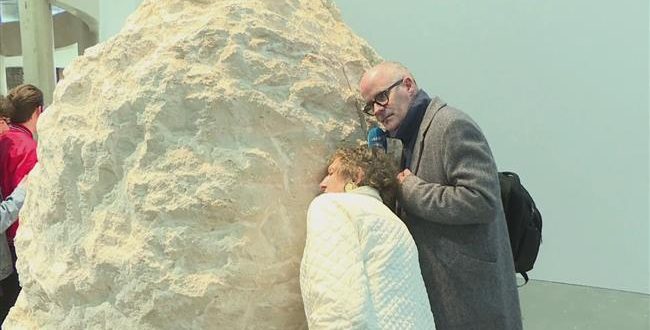 A French artist entombed inside a 12-tonne rock for nearly three days has described the experience as like ‘tripping’, insisting he would stick it out for a week.

Abraham Poincheval has decided to entrap himself inside a 12-ton limestone boulder at Paris’ Palais de Tokyo. The 44-year-old artist has carved out a hole inside the rock just big enough for him to sit up in.

Speaking through a crack in the limestone boulder, Abraham Poincheval said he had been buoyed by how his performance has ‘got into people’s heads’.

‘I am travelling in this rock without moving, like an astronaut,’ he said.

‘People seem to be very touched. They come and talk into the crack, read poetry to me, or tell me about their nightmares or their dreams,’ he said.

‘They are not so much talking to me, I think, as to the stone. I am very happy that the stone has got into their heads.’

If he survives the ordeal, the performance artist who has previously spent a fortnight sewn-up inside a stuffed bear, will attempt to become a human hen and hatch a dozen eggs by sitting on them for weeks on end.

Lack of sleep rather than claustrophobia is his biggest worry inside the darkness of the rock, he confessed.

Without a watch – and with only an emergency phone line – he has no way to tell the time.

‘I have some idea of time relative to the museum hours. I hear different sounds. But otherwise I have no sense of day or night,’ Poincheval said.

‘I can sleep but it is very hard. It is very strange, I don’t know whether I am sleeping well or not.’

Jean de Loisy, curator of the Palais de Tokyo museum where the”Stone” and “Egg” performances are being held, said Poincheval’s work should not be viewed as stunts.

Rather they were a series of mystical journeys that were profound meditations on “inner exploration, on modifying the self and of living in other realms beyond our own”.

Web articles – via partners/network co-ordinators. This website and its contents are the exclusive property of ANGA Media Corporation . We appreciate your feedback and respond to every request. Please fill in the form or send us email to: [email protected]
Previous: Westjet investigating after chunk of ice falls through Calgary home
Next: Juno Probe To Remain In Current Orbit Around Jupiter, Report