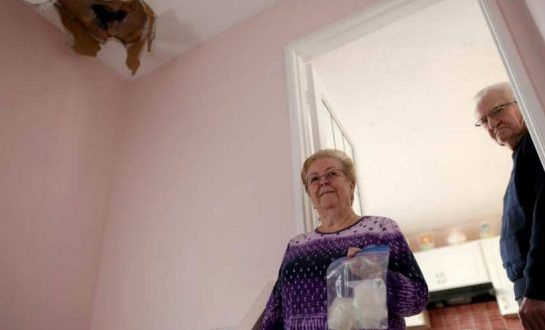 Calgary fire officials say they’ve determined that a large piece of ice that crashed through the roof of a home in the city came from a passing airplane.

Police officer Andy Nguyen said emergency crews were called to a home in the 100 block of Doverthorn Bay S.E. after reports of what the two adults living in the residence told police they thought was an explosion just after 7 p.m. Friday evening.

“Obviously the noise from the ice going through the roof was loud enough they thought it was an explosion,” Nguyen said. “We’re fairly certain that two small pieces of ice, about golf ball size, fell through the roof and ended up in the hallway of the home.”

Nguyen said no injuries were reported, and that the particular home happens to sit directly under the flightpath of planes landing at Calgary International Airport. Fire crews and police have contacted the Calgary Airport Authority to alert them of the incident.

Web articles – via partners/network co-ordinators. This website and its contents are the exclusive property of ANGA Media Corporation . We appreciate your feedback and respond to every request. Please fill in the form or send us email to: [email protected]
Previous: Bill Paxton: ‘Titanic,’ ‘Aliens’ star, dies after complications from surgery
Next: French artist entombed for a week in a rock says ‘it’s like tripping’ (Video)