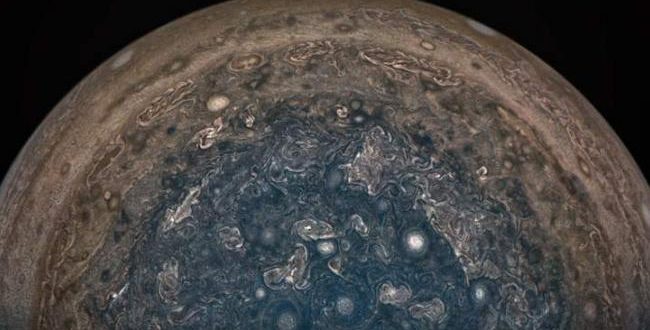 Juno Probe To Remain In Current Orbit Around Jupiter, Report

Juno Probe To Remain In Current Orbit Around Jupiter, Report

NASA’s Science Mission Directorate has elected to maintain the $1.13 billion Juno mission spacecraft at Jupiter in its current 53-day orbit rather than attempt a once-planned propulsive maneuver that would cut the orbital period to 14 days.

Researchers had hoped to tighten Juno’s orbit so that it circles around Jupiter every 14 days. But a braking burn of Juno’s engine, planned for last October, was canceled after two helium check valves, which are part of the plumbing for the spacecraft’s main engine, did not operate as expected when the propulsion system was pressurized.

“Telemetry from the spacecraft indicated that it took several minutes for the valves to open, while it took only a few seconds during past main engine firings,” NASA said in a status report Friday.

Engineers spent the next several months studying the problem, but in the end NASA decided it wasn’t worth the risk since Juno can accomplish its mission objectives without changing its orbit.

“We looked at multiple scenarios that would place Juno in a shorter-period orbit, but there was concern that another main engine burn could result in a less-than-desirable orbit,” project manager Rick Nybakken, with NASA’s Jet Propulsion Laboratory in Pasadena, Calif., said in a statement.

“The bottom line is a burn represented a risk to completion of Juno’s science objectives,” he said.

“The science will be just as spectacular as with our original plan,” added lead researcher Scott Bolton, with the Southwest Research Institute in San Antonio, Texas.

Juno, which reached Jupiter on July 4, makes its key science measurements when it passes closest to the planet, whether that happens every 14 days or every 53.

“The worst-case scenario is I have to be patient and get the science slowly,” Bolton said after the engine problem surfaced in October.

With the spacecraft healthy, managers likely will request funding from NASA to extend the mission, which currently is due to end on July 31, 2018, after what will now be a total of 12 close approaches for science.

Bolton pointed out that with Juno traveling farther away from Jupiter, it will spend less time near the planet’s killer radiation belts, perhaps prolonging its life.

“This is significant because radiation has been the main life-limiting factor for Juno,” Bolton said.

On close approach, Juno soars some 2,600 miles above Jupiter’s cloud tops. Data collected during the flybys will help scientists figure out how much water the planet contains, a key piece of information for determining how and where the solar system’s largest planet formed.

Web articles – via partners/network co-ordinators. This website and its contents are the exclusive property of ANGA Media Corporation . We appreciate your feedback and respond to every request. Please fill in the form or send us email to: [email protected]
Previous: French artist entombed for a week in a rock says ‘it’s like tripping’ (Video)
Next: Air Canada Plane skids off runway, TSB examining weather conditions