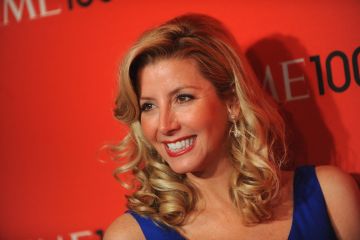 Thirteen years ago, Sara Blakely was a fax-machine saleswoman with a pair of pants that didn’t fit right. So she decided to cut the feet out of her pantyhose and put them on under her pants to make them lie smoothly. That was the inspiration for her company, Spanx, now estimated to have a market value of $1 billion.

Spanx’s success has now launched Blakely on to the celebrity circuit, with Oprah Winfrey – ranked 442nd richest person in the world with a $2.7bn fortune – one of her biggest fans. Indeed, her success is partly due to Winfrey, who described Spanx as among her “favourite things of 2000” on her chat show and sent a film crew to profile Blakely.

Thousands of orders rolled in as the video was aired, and the top US department store Neiman Marcus and its rivals clamoured for stock. Other A-listers such as Gwyneth Paltrow, Beyoncé and Eva Longoria admitted turning to Spanx to boost the wow factor on the red carpet. And not only female stars rely on Spanx to offer “tummy taming, thigh trimming and butt boosting” improvements.

Blakely saw the opportunity to double her customer base after Hollywood agents started requesting extra-large sizes, and it became clear that male stars were also relying on the clothing’s suction powers to help them cut it in a tuxedo. Men can now buy “hold it in” T-shirts that the firm claims enable chaps to “look sharper, stand taller and feel stronger”.

Blakely’s path to success was not without personal risk. At 29, the entrepreneur, whose early career included a stint as a Disney World ride greeter, ploughed her $5,000 life savings into developing the prototype pants. At the time she was a photocopier sales rep and moonlighting stand-up comedian. The business was at first run from her spare room.

She says success “wasn’t easy” and recounts taking a week off in 2000 to drive through North Carolina to persuade hosiery makers to embrace her idea. “I was shocked that only men seemed to make women’s undergarments,” she told one interviewer, recalling dozens of cold calls to textile mills across the south. “They all thought I was crazy.” Numerous knock-backs later, a manufacturer relented only when Blakely’s ideas got the backing of his two daughters.

Today, Forbes and Wall Street put Blakely’s net worth at about $1bn; she ranks 1,153 of 1,226 on the Forbes list, level-pegging with Britain’s Carphone Warehouse billionaire, Charles Dunstone.

Blakely, who is the advertising face and body of Spanx as well as its chief executive, also still owns 100% of the company. She has no outside investors, no bank debts. The runaway success of Spanx in the past decade means she is also crowned, by Forbes, the youngest female self-made billionaire in the world.

Spanx’s owner is not the only underwear tycoon to join the billionaire club this year. Kevin Plank, head of Under Armour, also makes his debut. In the early 1990s he began with the idea of a sweat-soaking sports T-shirt. By 1996, aged 23, he had founded the firm from his grandmother’s basement with $16,000 in cash and $40,000 on credit cards. He expanded into sports bras and basketball shoes. Forbes puts his net worth at $1.1bn.

Like Spanx, the Baltimore firm has spawned hundreds of imitations. High- street chains such as Marks & Spencer and Blacks produce girdles and long johns in the image of these US brands.

Web articles – via partners/network co-ordinators. This website and its contents are the exclusive property of ANGA Media Corporation . We appreciate your feedback and respond to every request. Please fill in the form or send us email to: [email protected]
Previous: Raw Milk Possibly Dangerous for Kids and pregnant women
Next: Navy Vet Scammer Bobby Thompson sentenced to 28 years in prison