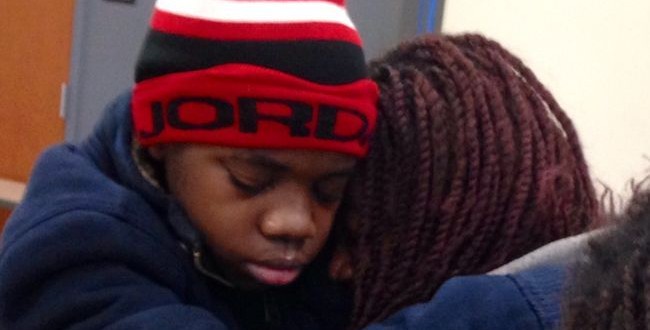 US Boy missing for 4 years found behind wall

A boy who was reported missing in 2010 has been found alive hidden behind a fake wall in a home in Atlanta, USA, police said, and reunited with his mother.

Five people living at the property, including the boys father, have been arrested.

Police say the missing boy was able to call his mother — who then told police her son was hidden behind a fake wall.

“I’m saying I’m kind of in shock because you think you know somebody,” said Julie Pizarro, a neighbor.

Julie Pizarro had no idea that the 13-year-old boy her son played with every day at this house was being held against his will.

“I mean it was a shock to all of us, honestly. They were really nice people, they were open you know. They were like Hey, you know come over anytime you want,” said Pizarro.

According to Clayton County police — the 13-year-old was kept behind a fake wall inside this home on Duke Court in Jonesboro.

Neighbors say the family moved to this house about six months ago. They also say they saw the boy out here all the time out in the yard. But they had no idea he was being held captive.

“The mother told me he was home schooled so I didn’t question as far as why he was always home,” said Pizarro.

Akono Ekundayo lived across the street.

He tells us he and his wife saw the boy nearly every day.

But now he’s left wondering if there were any warning signs that they missed.

“Gosh it was right under our nose and we could have done something if we had known, but he was never in distress, it seemed like,” said Akono Ekundayo, a neighbor.

“The young man didn’t seem like he was in any distress or anything. You just never know behind closed doors,” said Pizarro, a neighbor.

Tagged with: Boy found in wall

Web articles – via partners/network co-ordinators. This website and its contents are the exclusive property of ANGA Media Corporation . We appreciate your feedback and respond to every request. Please fill in the form or send us email to: [email protected]
Previous: Chernobyl drone : This Video Shows the Eerie Parts of Chernobyl Where Only Drones Can Go (Watch)
Next: AC/DC Rock or Bust : New Album Finally Drops