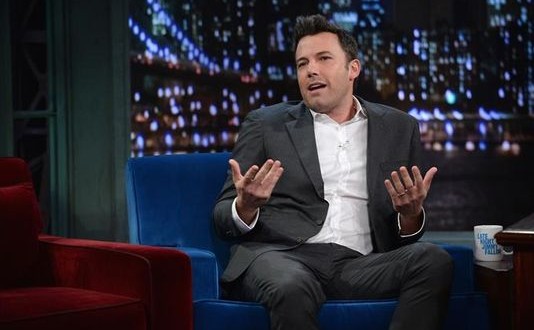 The actor, who set off a furious fanboy backlash when he was cast as Batman in the upcoming “Man of Steel” sequel last month, responded to his haters during a visit Monday to “Late Night.”

“They called me up and said ‘do you want do this?’. And I thought ‘well I’m not 25 man, are you sure about this?”. he told Fallon. But it was when he learned how Zack Snyder was planning to address the character of Batman that he agreed to sign on. “An incredible take on it … this is a brilliant way to do this”, he said, whilst confirming that it’s going to be a different take to Christopher Nolan’s.

Then Affleck addressed the reaction to the casting. It seems that Warner Bros tried to prime him for the level of backlash. “We want to show you some of the reactions that past people who have been cast have been got … people who were in these movies who did a great job. And people were like ‘kill himmmmmmm’.”

Making the point that you can’t really call a casting decision before a movie comes out, Affleck went on to say “I’m a big boy, I can handle anything. So they said ‘just don’t use the internet for a couple of days’. I handle shit, I’m very tough!”, Affleck said.

He finished by reiterating the strength of the material, which obviously he’s not giving away. But it sounds as though the new Batman has navigated his first obstacle at least: the wrath of the internet…

Web articles – via partners/network co-ordinators. This website and its contents are the exclusive property of ANGA Media Corporation . We appreciate your feedback and respond to every request. Please fill in the form or send us email to: [email protected]
Previous: James Gandolfini’s Teenage Son To Inherit Bulk Of $70M Fortune
Next: Man Saved From Burning car on 405 Freeway