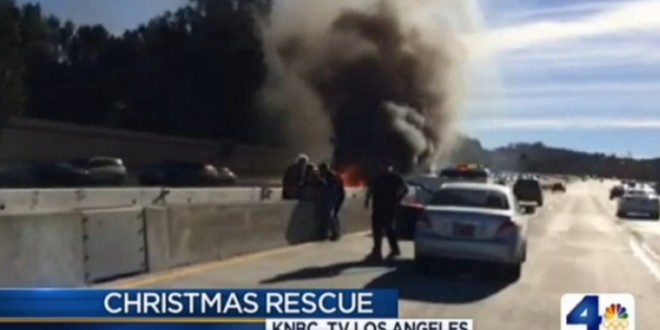 Just before 2:00 p.m. on Christmas day, Officer Don Thompson, a 26-year veteran with the Los Angeles Police Department, was heading to work on the southbound 405 Freeway just south of the 101 Freeway when he saw a vehicle on the northbound side crash into the center divider. The vehicle immediately caught fire

The unconscious driver was trapped behind the wheel as the car went up in flames, according to an LAPD news release.

As Thompson and other motorists freed the 72-year-old victim from the care, the passing fire battalion chief made a direct call to a dispatch center.

Thompson suffered minor burns to his hands and forearms, for which he was treated at a local urgent care facility.

The man who was pulled from the car was transported to a hospital with moderate injuries.

“It makes me feel good to know that I saved a life,” Thompson.

According to the California Highway Patrol’s Traffic Incident Information website, a black older model Mercedes station wagon hit the center divider several times after weaving in and out of lanes. After it crashed, the vehicle became fully engulfed in the flames, the CHP site stated.

Web articles – via partners/network co-ordinators. This website and its contents are the exclusive property of ANGA Media Corporation . We appreciate your feedback and respond to every request. Please fill in the form or send us email to: [email protected]
Previous: Actor Ben Affleck on Batman backlash: ‘I’m a big boy’
Next: Chinese woman gives birth to twins at 60 (PHOTO)