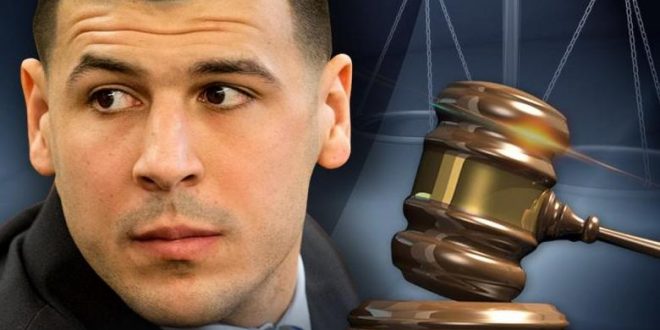 Hernandez had been acquitted of a 2012 double-murder just five days ago.

Correctional officers at the Souza-Baranowski Correctional Center in Shirley found Hernandez hanging in his cell around 3:05 a.m., according to a DOC statement. An attempt was made to revive him and he was transported to UMass Leominster, where he was pronounced dead at 4:07 a.m.

Hernandez was in a single cell in general population. According to the DOC, he attached a bed sheet to his cell window and attempted to block the door from the inside by jamming it with several items.

Hernandez was found not guilty April 14 of the murders of Daniel de Abreu and Safiro Furtado in Boston’s South End in 2012. He was convicted of unlawful possession of a firearm and sentenced to 4-5 years in a state prison, to run separate from the life sentence he was serving for the 2013 murder of Odin Lloyd.

Hernandez’s death comes as the New England Patriots head to the White House on Wednesday to celebrate their Super Bowl win.

Web articles – via partners/network co-ordinators. This website and its contents are the exclusive property of ANGA Media Corporation . We appreciate your feedback and respond to every request. Please fill in the form or send us email to: [email protected]
Previous: US Man killed three on street, says he ‘hates white people’
Next: Marvel or monster? Scientists find first live specimen of fabled giant shipworm