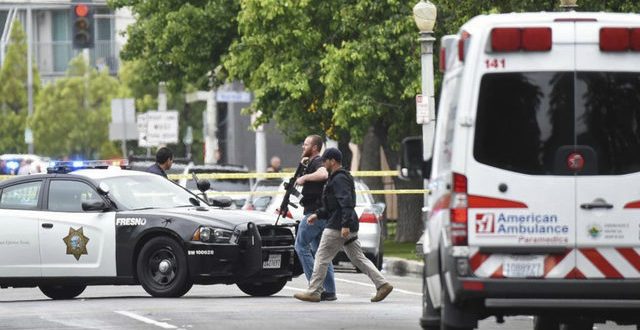 A gunman who nicknamed himself ‘Black Jesus’ shot and killed three strangers in a bid to kill as many white people as possible, police said.

“We believe this is solely based on race,” he said.

All three men killed in Tuesday’s shootings are white. The suspect, Kori Ali Muhammad, who is black, yelled “Allahu Akbar” (God is greatest) when he was arrested, officials said.

The gunman shot a PG&E truck passenger and two other men in downtown Fresno, Dyer said.

Muhammad, 39, will face four counts of murder and two counts of attempted murder, officials said. He also is accused of opening fire on two people who were not injured.

Dyer said the slain men are believed to have had no connection to Muhammad. The chief said it was too early to tell whether terrorism was a factor.

Two of those shot at were near Catholic Charities and were clients of the social services agency, Dyer said.

Muhammad was being sought in the April 13 slaying of Carl Williams, 25, an unarmed security guard shot outside a Fresno Motel 6.

Police had issued a plea for the public’s help to find Muhammad. He is homeless, and was believed to be armed, officials said.

Web articles – via partners/network co-ordinators. This website and its contents are the exclusive property of ANGA Media Corporation . We appreciate your feedback and respond to every request. Please fill in the form or send us email to: [email protected]
Previous: Melting Canadian glacier caused river to disappear in four days, says new research
Next: Aaron Hernandez: Fmr. NFL star commits suicide in Massachusetts prison