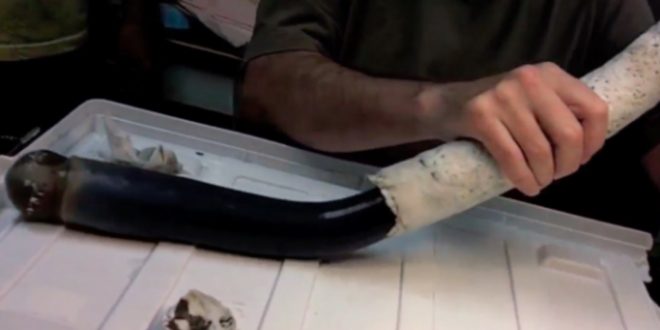 Actually a super-elongated mollusk, the giant shipworm is good company for the many hell-spawned, demon fish that roam darkened waters across the globe. It can grow up to five-feet long, and yes, give you nightmares.

The giant shipworm feeds off mud in a vertical position, spending its life encased in a thick shell it excretes on its own. Unlike the much more common shipworm, a maritime pest that burrows in boats feeding off rotten wood, the giant shipworm siphons up hydrogen sulfide from mud, decaying vegetation, and other marine sediments. It then uses a special bacteria in its gills to process that matter for digestion. Hydrogen sulfide emits that unforgiving “rotten eggs” smell commonly associated with farts. Suffice it to say giant shipworms aren’t easy on the nostrils, in addition to nightmarish in appearance.

Margo Haygood, a medicinal chemistry professor at the University of Utah, and her colleagues only knew where to look for them because a cluster of the shells had been caught on camera. The calcified tusks were spotted in a documentary film, poking out of the muddy seafloor in a shallow Filipino bay that had once been used to store logs. Researchers retrieved five specimens from the area, and published their findings today in the journal PNAS.

The scientists painstakingly chipped the giant shipworms out of their shells and dissected them, but the creatures still didn’t give up their secrets easily. The scientists were particularly stumped as to exactly how the worms grow so big. The cap of the giant shipworm’s shell seals over its mouth, presumably stopping it from directly consuming the sediment it lives in, and there were only “trace quantities of fecal matter” in their digestive systems. So, what were these worms eating?

The result of their studies was recently published online on the April 17 issue of Proceedings of the National Academy of Sciences.

Web articles – via partners/network co-ordinators. This website and its contents are the exclusive property of ANGA Media Corporation . We appreciate your feedback and respond to every request. Please fill in the form or send us email to: [email protected]
Previous: Aaron Hernandez: Fmr. NFL star commits suicide in Massachusetts prison
Next: WSU Physicists create negative-mass fluid that flows against the force (Video)