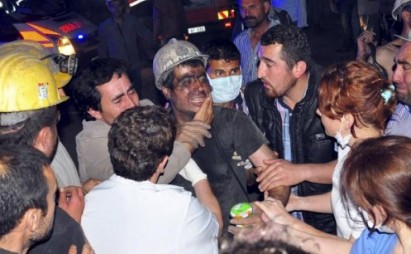 3 charged in Turkey Mine Disaster

3 charged in Turkey Mine Disaster, Report

At least 25 people have been arrested in Turkey following the May 13 mining disaster in Soma that killed 301 people. Three people had been charged with manslaughter.

Turkey’s Dogan news agency reported among those arrested on Sunday were the general manager Ramazan Dogru and the mine’s operations manager Akin Celik.

In regards to the reason behind the deadly incident, Sahiner said that a preliminary report “suggested the fire could have been caused by coal heating up after coming into contact with air.”

Turkish Energy Minister Taner Yildiz said on Saturday that a total of 301 people were killed because of the explosion and fire that devastated the coal mine in Soma in Turkey’s Manisa province on May 13. Another 485 miners escaped or were rescued, the minister added.

The administration of Prime Minister Recep Tayyip Erdogan has promised an all-out investigation into the tragedy.

The government and mining company officials vehemently deny that negligence was at the root of the accident.

Meanwhile, clashes have erupted in several Turkish cities between police and anti-government protesters angered by the explosion. Ankara is under fire for what is seen as its failure to protect and rescue trapped workers.

Lignite coal mining is a major industry in Turkey’s Soma. A similar incident in 1992 killed 263 miners near Zonguldak on the Black Sea.

Web articles – via partners/network co-ordinators. This website and its contents are the exclusive property of ANGA Media Corporation . We appreciate your feedback and respond to every request. Please fill in the form or send us email to: [email protected]
Previous: ‘SNL’ spoofs elevator brawl (Video)
Next: Most Alaska, BC glaciers ‘shrinking substantially’, Report