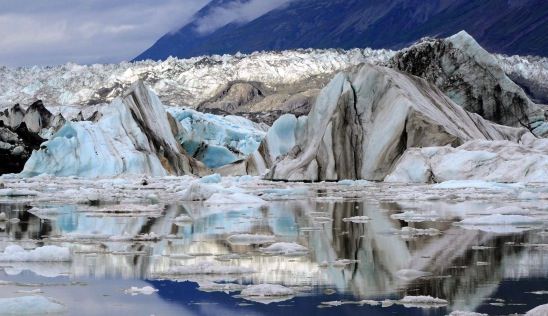 A new report shows that glaciers near Alaska are shrinking rapidly, and climate change is causing this substantial melt. The loss of the tens of thousands of glaciers in Alaska and neighbouring British Columbia, Canada alone is deeply worrying, according to scientists.

Not only is this glacial melt accelerating, but it may spell a host of problems for humans, including the rise in sea-levels, dangers to marine life, water supply and agriculture.

Glaciers in British Colombia and America’s northern state of Alaska are losing 20 to 30 percent of what is melting annually from the Greenland Ice Sheet.

This amounts to about 40 to 70 gigatons per year or about 10 percent of the annual discharge of the Mississippi River.

“The global decline in glacial and ice-sheet volume is predicted to be one of the largest contributors to global sea-level rise during this century,” the report said.

Brian Menounos, a geography professor at University of Northern British Columbia and one of the scientists involved in cross-border, multi-agency research into glacial loss, said he was concerned about the melting speed of the glaciers.

“We’ve seen an acceleration of the melt from the glaciers. When we start to look at some of these individual mountain ranges, we’re seeing some rates that are truly exceptional,” Menounos said.

Web articles – via partners/network co-ordinators. This website and its contents are the exclusive property of ANGA Media Corporation . We appreciate your feedback and respond to every request. Please fill in the form or send us email to: [email protected]
Previous: 3 charged in Turkey Mine Disaster, Report
Next: Prosthetic fin helps injured turtle (Video)