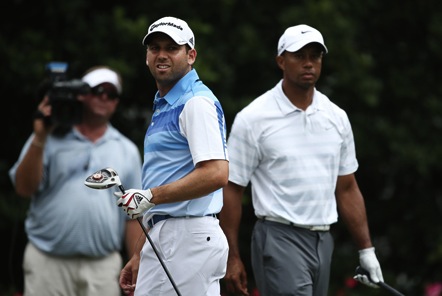 GOLF: BIG 2 FEUD ERUPTS AGAIN SERGIO GARCIA has accused Tiger Woods of lying as the feud between the pair erupted again yesterday. Their bad blood boiled over at The Players Championship when the Spaniard claimed the world No.1 caused crowd noise to disrupt his swing.

The pair have since given different versions of the incident at Sawgrass – and Woods labelled Garcia a whiner.

But before teeing up at tomorrow’s BMW PGA at Wentworth, the Spaniard hit back at the American who was revealed as a serial philanderer before his very public divorce.

“I try to tell the truth as much as possible to everybody,” Garcia said. “And usually the truth always wins.

“He called me a whiner. He’s probably right. But that’s also probably the first thing he’s told the media that’s true in 15 years.

“I know what he’s like. You guys are finding out. Life goes on. It’s one of those things.

“I try to be as truthful as possible. That’s why I think sometimes most of the people love me and some hate me. I understand that, but I’m not going to change.

Woods and Garcia looked set for an on-course rivalry when the then teenage Spaniard finished runner-up to the American at the 1999 US PGA.

But Woods has gone on to win 14 Majors while Garcia, 33, has yet to break his duck.

The American, 37, was furious when Garcia over-celebrated a made-for-TV matchplay win over him the day after he won the 2000 US PGA.

Then he texted friends “I just killed Tweetie Bird” after beating the yellow-clad Garcia at the 2006 Open.

On Monday, when Woods was asked if he had thought about contacting Garcia to clear the air, he replied: “No.”

World No.14 Garcia added: “Obviously, you can’t like everybody. I think there are people that you connect with and people you don’t. It’s as simple as that.

“It’s never been a true connection like I would have maybe with Luke Donald, Lee Westwood or Adam Scott, or some of the other guys that I get along with well.

* AMERICAN players are threatening legal action over the ban on the anchored putting stroke.

Golf’s rule-makers have announced the use of long or belly putters will be restricted from 2016. But the prospect of civil war took a step closer when the PGA Tour and PGA of America refused to back the move.

Four out of the past six Majors have been won by players using long putters, including Adam Scott in this year’s Masters at Augusta.

* EUROPEAN Ryder Cup captain Paul McGinley has confirmed both teams will have three wild-cards at Gleneagles next year.

In March, US skipper Tom Watson announced he will cut his picks from four to three, while the Irishman has increased his from two.

“By giving myself an extra pick, it’s a little bit of wiggle room,” said McGinley.

Web articles – via partners/network co-ordinators. This website and its contents are the exclusive property of ANGA Media Corporation . We appreciate your feedback and respond to every request. Please fill in the form or send us email to: [email protected]
Previous: Chris Brown and Drake feud over Rihanna : Reports
Next: Jimmy Kimmel : did parody of a Kanye West interview