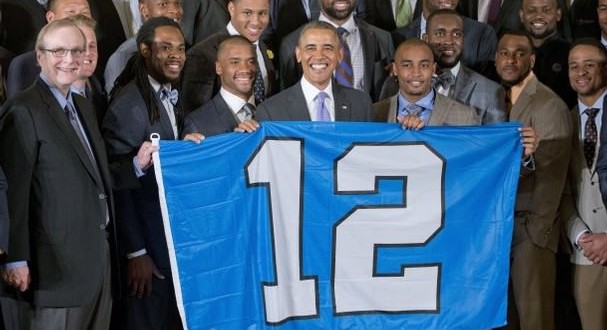 On Wednesday, the Super Bowl-champion Seattle Seahawks visited the White House, where they were honored by President Barack Obama after their 43-8 victory over the Denver Broncos in Super Bowl XLVIII on Feb. 2.

“We are here to celebrate the first Super Bowl victory for the city of Seattle,” President Obama said as he introduced the team to a cheering crowd.

Noting that some football analysts didn’t see Seattle as a top-tier tem, Obama said he always roots for the underdog because, quote, “seeing folks overcome the odds excites me.”

The Seahawks boarded buses at the VMAC facility in Renton on Tuesday afternoon for the trip to Sea-Tac Airport. As team members boarded a chartered plane, a massive banner loomed in the background reading “Go Hawks.”

Along with meeting the president, Earl Thomas, Russell Wilson, Richard Sherman and others are scheduled to meet with First Lady Michelle Obama.

As the team made its way to the ceremony, wide receiver Doug Baldwin tweeted, “Michelle, here I come … l-m-a-o.”

Coach Pete Carroll tweeted, “everyone is excited … we are very proud to represent the 12s in DC. Go Hawks.”

Richard Sherman wrote, “excited to visit the White House with the whole team.”

And quarterback Russell Wilson tweeted, “I can’t wait to go to the White House with my amazing Seahawks teammates … you get out what you put in.”

Web articles – via partners/network co-ordinators. This website and its contents are the exclusive property of ANGA Media Corporation . We appreciate your feedback and respond to every request. Please fill in the form or send us email to: [email protected]
Previous: Canadian Soldier killed in training crash on Alberta base
Next: Wozniacki on breakup : Tennis star breaks silence on split with McIlroy