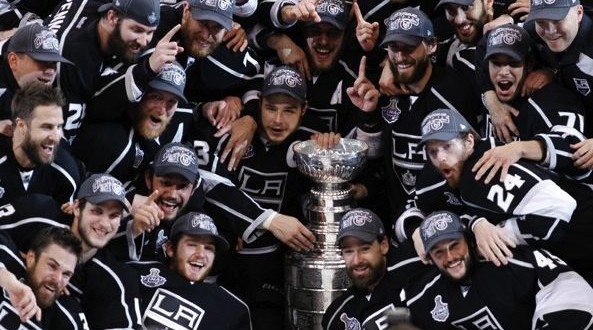 Another comeback. Another Hollywood ending. Another Stanley Cup.

“Couldn’t do it any other way,” Los Angeles Kings center Jarret Stoll said.

This was really the only way the Kings’ historic story of resiliency in the 2014 Stanley Cup Playoffs should have ended: a rally, a dramatic finish, a championship.

The Kings won the Stanley Cup for the second time in three seasons with a 3-2 double-overtime victory against the New York Rangers in Game 5 of the 2014 Final on Friday at Staples Center.

Defenseman Alec Martinez scored off a rebound at 14:43 of the second overtime. He led the rush into the zone and passed to Tyler Toffoli, whose shot was stopped by Rangers goalie Henrik Lundqvist. The rebound came right to Martinez, who put it in before tossing his gloves and stick in the air.

“It came off his pad pretty quick and I just tried to get a stick on it and get it on net,” Martinez said. “I blacked out. I don’t really remember. I think I threw my gear. I don’t know. I just remember everyone coming at me and I couldn’t breathe. It’s just a surreal moment. I’m just so happy for these guys.”

Martinez scored the overtime winner in Game 7 of the Western Conference Final against the Chicago Blackhawks. The 5-4 win was the Kings’ third Game 7 victory in as many rounds, all on the road. No NHL team had done that before, just as no team had played 26 games in the playoffs and finished as champions.

“We made it a little hard on ourselves, but all you have to do is win,” Kings center Jeff Carter said. “It doesn’t matter how you do it.”

The Kings needed five games to defeat the Rangers and had to win coming from behind in three of them, all at home, all in overtime. Los Angeles erased four two-goal deficits to win Games 1 and 2, and came back from one-goal down to clinch the Cup in Game 5.

The Stanley Cup Final was simply the closing chapter in a story of comebacks by the Kings this spring.

Los Angeles erased a 3-0 series deficit to eliminate the San Jose Sharks in the first round. It won Games 6 and 7 against the Anaheim Ducks in the second round. The Kings beat the Blackhawks in seven games despite losing Games 5 and 6; they won Game 7 after falling behind 2-0.

The Kings won the Cup in 2012 after taking a 3-0 lead in all four rounds. They lost four games, including two in the Final to the New Jersey Devils.

“This one was tough,” Carter said. “I think we got a real appreciation for what it takes now to win this, a lot of ups and downs. We had to dig deep and we had to really battle.”

Justin Williams, who scored the first goal 6:04 into Game 5, was awarded the Conn Smythe Trophy as most valuable player of the playoffs. He finished the postseason with 25 points in 26 games, including seven points in the Cup Final. Williams scored the OT winner in Game 1 (3-2).

“There’s no words that can describe what you’re feeling right now,” Williams said. “What we went through this year makes it so much more special. Each Cup is unique, but God we earned this one.”

The Rangers felt they gave away too many of their good chances. They had the four two-goal leads in Games 1 and 2, but lost 3-2 and 5-4 in overtime. They had a 2-1 lead going into the third period of Game 5, but Marian Gaborik tied the score with his League-best 14th goal of the postseason at 7:56 of the third period.

Lundqvist made 48 saves in Game 5 after making 40 in a 2-1, Game 4 victory Wednesday at Madison Square Garden. He finished the series with a .923 save percentage and one win.

“I knew going into this series it was going to end in tears, tears of joy or tears of heartbreak,” Lundqvist said. “It’s extremely tough.”

Los Angeles goalie Jonathan Quick made 28 saves, more than half of them (15) in overtime.

“So close, an inch here and an inch there, that’s what it’s been about all series,” Girardi said. “There’s no little play in this series. Every play meant something, and they just made some big plays when they had to, to get the timely goals.”

The Rangers took a 2-1 in the second period on special-teams goals by Kreider (power play) and Brian Boyle (shorthanded) in the final 4:23. However, as the Kings did in the first period, they scored in the third before the Rangers had a shot on goal.

New York got its first shot of the third period 28 seconds after Gaborik’s power-play goal. The Rangers finished with three in the period and were outshot 61-25 in the third period in this series.

“It’s got to be the worst feeling for a hockey player,” Rangers defenseman Marc Staal said. “You get this far, you do so much as a group, as a team, and then you fall short; I’ve never felt any worse.”

The Kings were close to feeling terrible so many times throughout their run.

Down 3-0 to the Sharks, the Kings felt like they would win the series. They did.

“We were never worried,” Carter said. “We knew if we played our game we’d be successful.”

Down 3-2 to the Ducks, the Kings had no doubt they’d come home to Staples Center, win Game 6, then roll in Game 7. They did.

“We push each other,” Stoll said. “It starts with our head coach [Darryl Sutter], he pushes us, and then we have a great leadership group and we push everybody. It just works.”

Trailing 2-0 in Game 7 against Chicago meant nothing to Los Angeles. The Kings were so confident and so resilient they felt they had the Blackhawks on the ropes, even though it should have been the other way around.

“Character and leadership in the locker room,” Martinez said when asked why the Kings are so resilient. “We’ve got an unbelievable group in the room. [General manager] Dean [Lombardi] has always said that we’ve got to be able to play hockey well together, but we’ve also got to like each other. All the guys in that locker room, we love each other. It’s an unbelievable group.”

Web articles – via partners/network co-ordinators. This website and its contents are the exclusive property of ANGA Media Corporation . We appreciate your feedback and respond to every request. Please fill in the form or send us email to: [email protected]
Previous: Casey Cohen : Reality star denies Jay Z affair
Next: Low vitamin D tied to premature death, Study