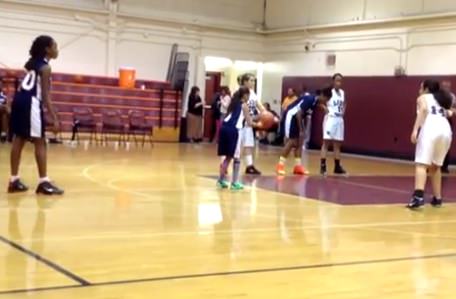 Her name is Jaden Newman and this video shows her dominating a high school varsity basketball team.

A stand out player in high school basketball might not be rare, but as you can probably tell, Newman isn’t 17 or 18 like most of her opponents presumably are, she is a nine-year-old currently in the 4th grade.

And this doesn’t seem to be a one off either.

“She wants to be like Diana Taurasi,” said dad Jamie Newman. “She wants to play for her country, for Connecticut and in the WNBA.”
In a previous life I covered high school sports for a living and watched a considerable amount of girls basketball. A player with the handle like Newman’s scoring a lot of points is believable, especially since we can’t exactly measure the level of play that Downey Christian (an independent high school) matches up against. Newman’s small stature and quickness is probably an asset against slower-footed opponents.

Newman’s older brother, Jaden, similarly made news for excelling at the varsity level as an 11-year-old, leading to a profile in the New York Times last year.

Web articles – via partners/network co-ordinators. This website and its contents are the exclusive property of ANGA Media Corporation . We appreciate your feedback and respond to every request. Please fill in the form or send us email to: [email protected]
Previous: Scientists accidentally capture ball lightning (Video)
Next: Pollution from China Reaches U.S., Study Finds