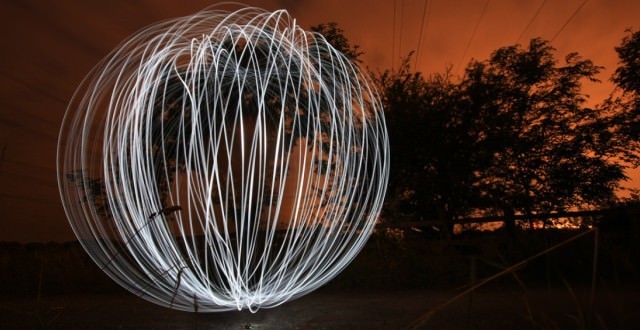 Stories of mysterious lightning balls appearing during storms go back hundreds of years. Mostly people just chalked this up to “yeah, and I’ve seen a UFO too, bro”; but now, for the first time ever, Chinese scientists have actually observed ball lightning in the wild.

Ball lightning has been one of the most mysterious natural phenomena for centuries, partly because it is so rare and transient and therefore hard to investigate. But a fortuitous observation during field experiments in China to study ordinary lightning, reported in Physical Review Letters, has now provided what seems to be the first measurement of the emission spectrum of ball lightning. The data suggest that the glowing ball was composed of elements from soil, consistent with one popular theory.

Ball lightning typically appears during thunderstorms as a glow, ranging from the size of a golf ball to several meters across, which floats in the air for between one second and tens of seconds. There are many historical reports of such “fireballs” injuring or even killing people and setting buildings alight, and they have sometimes been given supernatural explanations.

Scientific theories of ball lightning abound, with varying degrees of plausibility. Glowing plasma balls have been created artificially by passing intense microwaves through air [1] or by underwater electrical discharges [2]. But such laboratory experiments may not bear any relation to ball lightning formation in the natural environment—about which very little is known, since there has been almost no solid data.

One popular theory is that ball lightning is caused when lightning striking the ground vaporizes some of the silicate minerals in soil. Carbon in the soil strips the silicates of oxygen through chemical reactions, creating a gas of energetic silicon atoms. These then recombine to form nanoparticles or filaments which, while still floating in air, react with oxygen, releasing heat and emitting the glow [3]. If that’s so, one should expect to see atomic emission lines of silicon and other soil elements in the spectrum.

That is what Ping Yuan and co-workers from Northwest Normal University in Lanzhou, China, now report. They had set up spectrometers on the remote Qinghai Plateau of northwest China to investigate ordinary lightning, which is frequent in this region. During one late-evening thunderstorm in July 2012, they saw ball lightning appear just after a lightning strike about 900 meters from their apparatus and were able to record a spectrum and high-speed video footage of the ball.

The recorded glow was about 5 meters across—the actual size of the ball was much smaller—and it changed from white to reddish during the second or so that it lasted. Although the darkness prevented the researchers from estimating the ball’s altitude, they saw it drift horizontally for about 10 meters and ascend about 3 meters. Yuan says that this is the first time ball lightning has been seen to be created by a cloud-to-ground lightning strike.

The researchers found that the spectrum contained several emission lines from silicon, iron, and calcium—all elements expected to be abundant in soil. One would also expect aluminum to be present, given its abundance in soil minerals. But the researchers couldn’t confirm that, as there are no emission lines of neutral aluminum atoms within the spectral range of their instrument (wavelengths of 400–1000 nanometers). The team also used their video data to plot the ball lightning’s intensity and apparent diameter as they varied in time, down to the millisecond time-scale.

“I think that this is a unique observation that is probably of ball lightning, or one type of ball lightning,” says lightning specialist Martin Uman of the University of Florida in Gainesville. “There have been many research programs that routinely video or photograph natural and triggered lightning,” he says, “but none, as far as I am aware, has stumbled on a ball lightning.”

“This one certainly seems to be made of dirt,” says Uman, but he says the data don’t reveal any hints as to which ball lightning theory is correct. Such observations might ultimately suggest how to create ball lightning artificially, says Uman, and Yuan agrees. “We are planning to simulate the observational conditions and reproduce it in the laboratory,” says Yuan.

Web articles – via partners/network co-ordinators. This website and its contents are the exclusive property of ANGA Media Corporation . We appreciate your feedback and respond to every request. Please fill in the form or send us email to: [email protected]
Previous: NYC homicide Suspect Caught In Schulenburg
Next: Jaden Newman puts up 63 points : 9-year-old stars on varsity hoops team