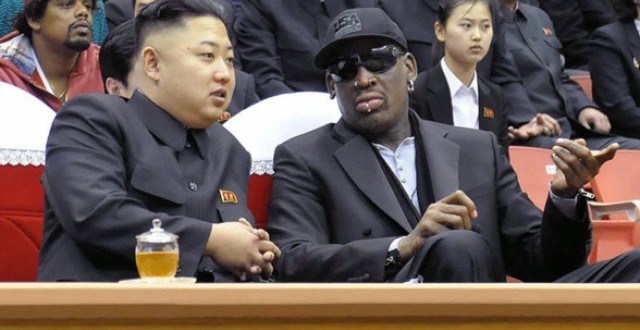 Basketball Hall of Famer Dennis Rodman arrived in North Korea on Tuesday to visit communist leader Kim Jong Un, spurring hopes that a jailed American tour operator might be freed as a gesture of friendship between the two eccentrics.

Rodman, on his second visit to the Hermit Kingdom this year, appealed to Kim after his first visit in February to “do me a solid” and release Kenneth Bae, a 44-year-old Korean American evangelist who was arrested in November.

Bae was convicted of committing “hostile acts against the state” and sentenced to 15 years hard labor. He is reportedly in poor health, according to his family in Washington state, and was transferred from a prison camp to a hospital last month.

Rodman told journalists in Beijing as he set off for North Korea that he wasn’t traveling there as a diplomat and that he hadn’t “been promised anything” in the Bae case.

News services in Pyongyang reported that Rodman’s arrival Tuesday afternoon was announced by North Korea’s state-run Korea Central News Agency, a one-line notice in the official media that is unusual for what Rodman has cast as a private visit.

“I am happy to come back here again, to meet my friend,” China’s official Xinhua news agency quoted Rodman as saying of his expected talks with Kim. But the Xinhua report also quoted an unidentified North Korean Sports Ministry source as saying the visit “has nothing to do” with the Bae case.

Rodman’s first visit to Pyongyang was intended as a cultural promotion of the Harlem Globetrotters for Kim, an avid fan of the NBA — in particular the Chicago Bulls, for whom Rodman played and won three championship titles.

The visit in February followed North Korea’s detonation of a prohibited nuclear test device and amid a furious barrage of threats from Pyongyang against the United States and South Korea.

Just last week, Pyongyang canceled the visit of U.S. State Department representative Robert King, who as special envoy for North Korean rights issues had hoped to plead the U.S. case for Bae’s release on humanitarian grounds. North Korean Foreign Ministry officials said King’s invitation was being scrapped because Washington had soured the diplomatic atmosphere by including a nuclear-capable bomber in recent air maneuvers over South Korea.

Bae, who organized tours to China and North Korea, was arrested in November in the northeastern port city of Rason. He was reported to be carrying “inflammatory” materials that led to charges of supporting the overthrow of the North Korean state. The possessions may have been religious publications or photographs of emaciated orphans, as the evangelist also raised funds for child victims of North Korea’s perpetual food shortages.

After his first visit earlier this year, Rodman vowed “I’ll be back over there. I’m going to try to get the guy out,” according to the celebrity news website TMZ in May.

Rodman also raised the issue of Bae’s imprisonment in an appeal to Kim issued through Twitter: “I’m calling on the Supreme Leader of North Korea, or as I call him ‘Kim,’ to do me a solid and cut Kenneth Bae loose.”

Web articles – via partners/network co-ordinators. This website and its contents are the exclusive property of ANGA Media Corporation . We appreciate your feedback and respond to every request. Please fill in the form or send us email to: [email protected]
Previous: Ricky Williams coaches at the University of the Incarnate Word : Reports
Next: Shawn kemp opens oskar’s kitchen : Photo