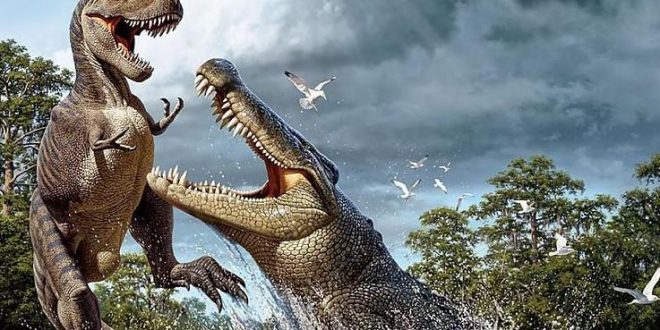 Researchers have identified a new species of crocodile that lived around 95 million years ago and preyed on everything from turtles to dinosaurs.

Dubbed the Deltasuchus motherali, the ancient beast was discovered by a local teenager, Austin Motheral. Motheral worked with paleontoligists from the University of Tennessee at Knoxville, who spent a decade excavating the bones.

They found that adults grew up to 20 feet long and, based on the bite marks discovered on the fossilized bones of prey animals, ate whatever they wanted in their environment, from turtles to dinosaurs.

The team found the bones in a place one normally doesn’t think to look for ancient fossils—in the heart of the Dallas-Fort Worth Metroplex.

The findings were recently published in the Journal of Vertebrate Paleontology.

Drumheller-Horton collaborated with Thomas Adams, curator of paleontology and geology at the Witte Museum in San Antonio, Texas, and Chris Noto of the University of Wisconsin–Parkside.

The site that produced the new species was discovered in Arlington, Texas, in 2003 by amateur fossil hunters Art Sahlstein, Bill Walker, and Phil Kirchoff.

Dubbed the Arlington Archosaur Site, the area is undergoing rapid residential development, and paleontologists have been working with local volunteers and fossil enthusiasts to excavate the site over the past decade.

“We simply don’t have that many North American fossils from the middle of the Cretaceous, the last period of the age of dinosaurs, and the eastern half of the continent is particularly poorly understood,” Drumheller-Horton said. “Fossils from the Arlington Archosaur Site are helping fill in this gap, and Deltasuchus is only the first of several new species to be reported from the locality.”

Deltasuchus motherali is named for one of the site volunteers, Austin Motheral, who first uncovered the fossils of this particular crocodile with a small tractor when he was just 15 years old.

Work on the site is supported by a grant from the National Geographic Society, which is funding continued excavations and study of this unique fossil area. Fossils from the site, including the Deltasuchus motherali bones, are part of the collections of the Perot Museum of Nature and Science in Dallas.

Deltasuchus is the first of what may prove to be several new species described from this fossil site. The area preserves a complete ancient ecosystem ranging from 95 million to 100 million years old, and its fossils are important in advancing the understanding of ancient North American land and freshwater ecosystems.

While most of Texas was covered by a shallow sea at the time, the Dallas-Fort Worth area was part of a large peninsula that jutted out from the northeast. The peninsula was a lush environment of river deltas and swamps that teemed with wildlife, including dinosaurs, crocodiles, turtles, mammals, amphibians, fish, invertebrates, and plants.

Web articles – via partners/network co-ordinators. This website and its contents are the exclusive property of ANGA Media Corporation . We appreciate your feedback and respond to every request. Please fill in the form or send us email to: [email protected]
Previous: DFO: Another Right whale found dead in Gulf of St. Lawrence
Next: Toronto real estate broker gunned down