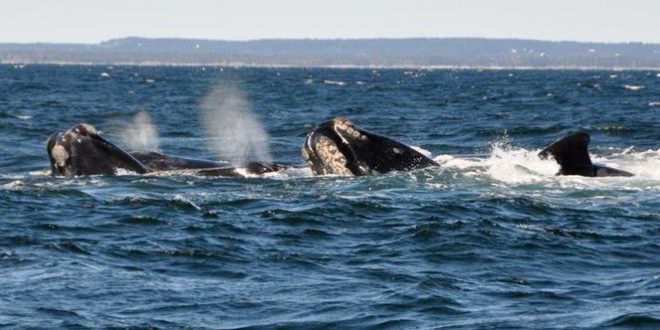 Fisheries officials say another dead Right whale has been discovered in the Gulf of St. Lawrence.

DFO says the whale was found Friday morning, this marks the eleventh confirmed North Atlantic right whale death in the Gulf of St. Lawrence this year. DFO says there will be an attempt to recover and perform a necropsy on the right whale next week.

The department says it could not confirm whether this whale is the same as the one spotted entagled off the Gapsé Peninsula at the end of August. DFO say that whale has not been seen since it was first reported entagled on Aug. 28.

The North-Atlantic right whale is mostly found along the Atlantic coast of North America, where it is threatened by entanglement in fishing gear and ship collisions. Some scientists believe these whales have already been extirpated from the eastern North Atlantic and now survive only on the east coast of the U.S. and Canada.

Between 300 and 350 individuals still exist, but despite seven decades of protection efforts, no population growth has been observed.

A species with close attachments

This large whale mostly inhabits temperate waters, and compared to other similar-sized cetaceans is found more often in coastal waters, especially during the breeding season.

Whereas groups of North Atlantic right whales once numbered in the hundreds in feeding grounds, nowadays they usually travel alone or in groups of 2-3 (sometimes up to about 12).

Groups splinter off for feeding, probably because of the sheer quantity of food required for each animal. These aggregations are not fixed, and individuals have been observed to change groups. One notable exception is in the Bay of Fundy, where up to two-thirds of the remaining population aggregates in the summer to feed.

As with other mammals, right whale mothers and their calves display strong attachments, with the calf keeping in close contact with its mother by swimming up on her back or butting her with its head. Sometimes the mother may roll over to hold her calf with her flippers. Mating pairs are reported not to maintain long-term bonds.

Web articles – via partners/network co-ordinators. This website and its contents are the exclusive property of ANGA Media Corporation . We appreciate your feedback and respond to every request. Please fill in the form or send us email to: [email protected]
Previous: Ancient amphibians had mouthful of teeth, finds new research
Next: Experts identify new “top predator” prehistoric crocodile