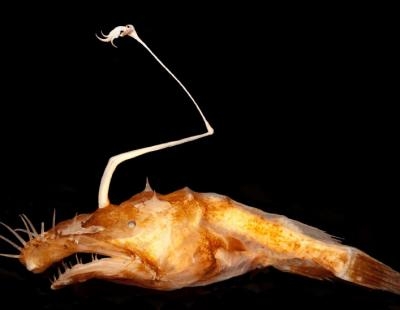 According to CNN, Theodore W. Pietsch and Tracey T. Sutton detailed the new species in a study published in the journal Copeia.

Adding to the list of deep-sea creatures, a Nova Southeastern University’s (NSU) Halmos College of Natural Sciences and Oceanography researcher recently found a never-before seen species from the deep waters of the northern Gulf of Mexico. Tracey Sutton, Ph.D., is one of NSU’s experts on deep-sea life and he teamed up with Theodore Pietsch, Ph.D. from the University of Washington to formally describe this new species of anglerfish.

“As a researcher, the one thing I know is that there’s so much more we can learn about our oceans,” Dr. Sutton said. “Every time we go out on a deep-sea research excursion there’s a good chance we’ll see something we’ve never seen before – the life at these depths is really amazing.”

This new fish, which was found between 1,000-1,500 meters depth, is a new species of Ceratioid anglerfish (Genus Lasiognathus Regan [Lophiiformes: Oneirodidae]). The three females specimens found ranged in size from 30-95 mm in length. Looking at a photo of the fish, one quickly understands how anglerfishes get their common name.

At the ocean depths this fish lives in, there is no sunlight. The only light is that from creatures that produce bioluminescence, which means they generate their own light source. Also, at these depths, the pressure is immense – over one ton (2,200 pounds) per square inch. And the fight for food is never-ending. That’s why these fish have developed their unique way of attracting prey – from the appendage at the top of their head, which resembles a fishing pole of sorts. And, like its human counterparts, this fish dangles the appendage until an unsuspecting fish swims up thinking they found a meal, only to quickly learn that they are, in fact, a meal themselves.

“Finding this new species reinforces the notion that our inventory of life in the vast ocean interior is far from complete,” said Dr. Sutton. “Every research trip is an adventure and another opportunity to learn about our planet and the varied creatures who call it home.”

Dr. Sutton studies the ecology of marine systems, particularly those of the open ocean. As part of those efforts, Dr. Sutton is leading a team of scientists and researchers studying the effects of oil spills on deep-sea marine life. That project recently received a boost, thanks to a recent financial award from the Gulf of Mexico Research Initiative (GoMRI.) NSU was awarded $8.5 million and is one of 12 organizations selected to receive part of $140 million for continued research in the area of oil spills and how we respond to them.

Along with his work at NSU, Dr. Sutton is also a steering committee member of the Deep Ocean Stewardship Initiative, a co-Principal Investigator in the Global Ocean Biodiversity Initiative, an Expert Panelist in the United Nations First Ocean Assessment, an Affiliate Scientist of the Monterey Bay Aquarium Research Institute, and Adjunct Faculty of the Ocean Research and Conservation Association. Sutton is interested in the connections of a variety of trophic levels from the near surface to great depths, with emphasis on the fauna and ecology of the deep-pelagic zone (200 m to 5,000 m). He combines observational, organismal and theoretical approaches to help understand Earth’s largest, but least known ecosystems.

As for this new anglerfish, the three female specimens are considered “type specimens” (i.e. they define the species,) and as such, Dr. Sutton said that they will reside in the Ichthyology Collection at the University of Washington, which is home to the world’s largest deep-sea anglerfish collection.

Web articles – via partners/network co-ordinators. This website and its contents are the exclusive property of ANGA Media Corporation . We appreciate your feedback and respond to every request. Please fill in the form or send us email to: [email protected]
Previous: Gabrielle Markel : Alaska Woman Mauled by Grizzly Bear While Jogging
Next: Man attacks van while children scream inside